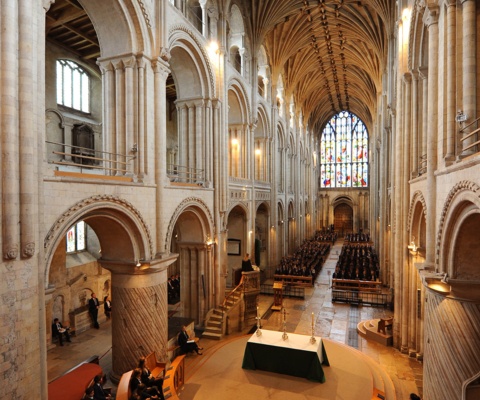 The Head Master's address to the school during the first assembly of the Lent term:

"He lifted me out of the slimy pit, out of the mud and mire". Well, I know that 2016 was not great in some ways but I am not sure that we need to go as far as Psalm 40 in expressing our disappointment. Indeed, I hope that is not how you feel as you return to a new school term and a new calendar year, though there is something more reassuring for the start of January about the next phrase: "he set my feet on a rock and gave me a firm place to stand".

Yet there can be no doubt that we all benefit from the opportunity at this time of year to recalibrate, to check that the goals we have set ourselves are appropriate in their combination of ambition and achievability. And one of the joys of being involved in a school full of young people is the innate sense of hope which I have always found to be present: at your age, you can be anything, you can do anything, you can choose the path which suits you most. I think this is particularly true as expectation recedes that all who can go to a well-known academic course at a university of repute will do so or that university is the only way to secure a good career. It remains the right path for many Norvicensians, but exciting creative courses, technological opportunities, entrepreneurial routes and the advent of high-quality employment-based training are challenging the traditional view of university as the be-all and end-all. It is not a lack of ambition which will stop some of our best young people going to university but an abundance of it. I encourage you to give full rein to the flexibility that your stage in life allows: develop your known passions, give yourself leadership and service opportunities, but also try to create new experiences for yourselves. You will never have a better time to do so than when you are surrounded by like-minded, talented peers and have the support of an enterprising, creative organisation such as Norwich School. Some of my favourite pupil initiatives of recent times have been the pupil-led establishment of the Norbeecenisan honey enterprise and the entries to the Art/Science photography competition. I have also enjoyed the work of E23 radio and Aspect, and have been particularly impressed by the L6th former who has qualified as a first aid trainer and is now delivering lessons to pupils in our Lower School. You know that I am available to meet with pupils without appointment at 8.15 on any day except Tuesday, so come along and try your schemes out on me.

However, on the path to achieving your ambitions, whatever they may be, I guarantee one thing: there will be setbacks; indeed, if not, one could argue that they were not ambitious enough targets in the first place. An image I came across over the holiday to help with the adaptability required for success in our complex and changing world was from another era. It came from the Duke of Wellington, the other statue on Upper Close Green, the one near the Ethelbert Gate; if Nelson is Britain's finest sailor, Wellington has a fair claim to be its finest soldier, leading Britain to victory against Napoleonic forces in the Peninsular War before defeating the man himself decisively at Waterloo in 1815. In describing reasons for his military successes, he said that his opponents "planned their campaigns as you might make a splendid piece of harness [ie leather]. It looks very well; and answers very well; until it gets broken; and then you are done for. Now I made my campaigns of ropes. If anything went wrong, I tied a knot; and went on".

It is interesting to note how Wellington cites his flexibility as a key differentiator from his opponents. It is often said that it was Nelson's trust in his key commanders to adapt a flexible battle plan to fit the circumstances they faced which was a key ingredient in Britain's naval victories of the time. Being more flexible than the opponent paid dividends, then, for both Nelson and Wellington.

So how does advice on military strategy from the 19th century affect you as you plan for a new year in the 21st? Well, I encourage you too to make plans to get where you want to go. I am looking forward to my annual meeting with all the L6 for short interviews during the course of this term. I always have the same 3 questions: