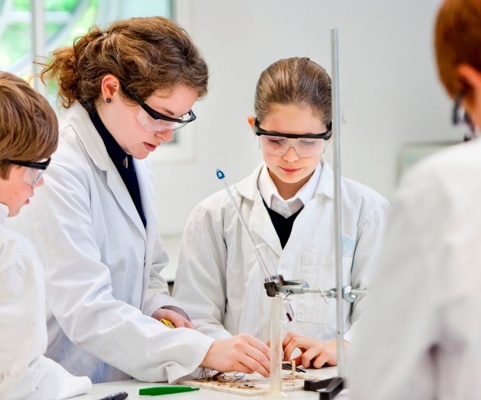 Myths I hear about Physics and Maths Stephanie Taylor, Ogden Physics teaching fellow and teacher at Norwich School, tells us about myths she often hears about Physics and Maths, and why she thinks they are fundamentally wrong.

"They are not creative subjects.

Anyone who studies the physics and maths of black holes on one scale and quarks on the other has a pretty well-functioning imagination. Every time you ask yourself a question in everyday life about how or why something is working (or not) you are being creative (unless you get straight onto Google), often hypothesising and linking your previous knowledge to the situation in a way you haven't thought of before. To quote Einstein: "Imagination is more important than knowledge. For knowledge is limited to all we now know and understand, while imagination embraces the entire world, and all there ever will be to know and understand."

Getting things wrong is bad.

Before the announcement that the Higgs boson had been found, scientists were trying to convince the general public that actually a negative result - finding it definitely didn't exist, at least in the way we thought it did, would actually be just as interesting, if not more so, than a positive discovery (but probably not for Professor Higgs). Physicists would have had to throw a lot of nice maths that seemed to work, that Higgs and Englert had used huge imagination in employing, out of the window and start again. Exciting! I know it feels good to get something right - it is reassuring and we get high marks that way. But when you solve a really easy problem straight away, it doesn't feel nearly as good as when you have got something wrong, crossed it out, started again and finally battled to a solution - now that feels great! You have learnt something new. As the astronaut Chris Hadfield says in his autobiography: "Early success is a terrible teacher. You're essentially being rewarded for a lack of preparation, so when you find yourself in a situation where you must prepare, you can't do it. You don't know how."

You have to be innately brilliant.

If you say you study Physics or Maths, as well as often being a conversation-stopper, people tend to be impressed. Should they be any more so than if you had studied another discipline? It's true, Physics and Maths are hard, but I chose to study them at A-level because I enjoyed them and the extra time I spent on them resulted in higher marks too. Languages, on the other hand, I found really difficult and I have a huge amount of respect and awe for multi-lingual people. Studying any subject well is partly down to your individual strengths but also down to your motivation and willingness to put in some serious hard work. Is it only worth studying science if you are going to get a Nobel Prize or become an astronaut? Absolutely not! There are so many worthwhile and fascinating jobs science and maths can lead to. My favourite was someone with a PhD in Maths who modelled the movement of the slinky spring in Toy Story.

Chris Hadfield, fond of playing guitars in space, wrote an autobiography about his experiences. He knew that he was going to dedicate his life to something that in all likelihood would never happen (he was hugely lucky, as well as talented, to end up on the International Space Station for six months), but it didn't matter! "If you start thinking that only your biggest and shiniest moments count, you're setting yourself up to feel like a failure most of the time." "Focus on the journey, not on arriving at a certain destination."