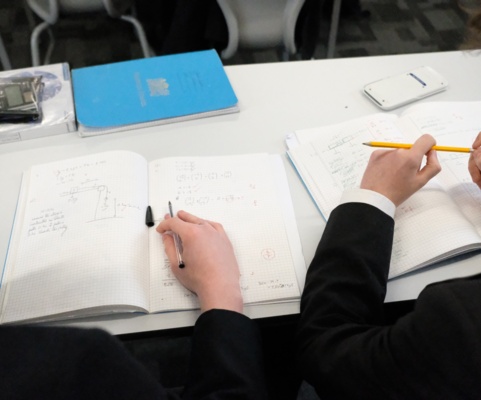 "My first class" an assembly by Dr Richardson

"Last year all of us teachers were told that to comply with a new law known as GDPR, we should throw out all old mark books, and any other information we might hold about former pupils. Frankly, I still can’t really understand why anyone would be interested in the scores from a Lower 4 fractions test in 2013. But being a bit of a hoarder, I had lots of old books and files in my room, and it was probably high time I had a clear-out anyway. However, I couldn’t throw it all out. Amongst my dusty old mark books was the one from my first year as a teacher, back in September 2007. I can’t throw this out. This is part of my life, part of me. So don’t tell anyone, but I kept this one.
The class I remember the best is my first Middle 5 class, presumably because they were the first class I kept for 2 years. Here’s a selection of my memories. Following the data protection guidelines, I shall refer to individuals by their initials.
JS reminds me of what must have been one of my first days at the school. Still getting used to the absence of a bell at the end of the lesson, I failed the notice the end of period 2. When the pupils eventually started to get restless, I said. “I’m sorry – have I overrun? Is it break time?” JS was the one who pointed out “It was Break 20 minutes ago sir. We need to get to our next lesson”.
Then there was PB, who I gave my first imposition to. I can’t remember what it was for, but I do remember asking him for it in the playground the following day. He was completely baffled by my request, and it turned out I was talking to the wrong boy. I was talking to WE who sat in the same seat but in a different class. That taught me something about how I learn pupils names.
HB was the goalkeeper in my first hockey match. We lost 13-0 to Ipswich. MG was the first boy the throw up on the UEA track during one of my athletics sessions. I remember that JV’s Mum did the ultrasound scan of our first baby at the N&N.
Just about the most unlikely memory from this time is chasing a burglar through the streets of Norwich with 2 pupils, SP and BR. It happened during a staff cricket match down at the Lower Close. When we were fielding, someone noticed 2 shifty characters emerging from the pavilion and heading down towards the Scout Hut. When they started to run, the chase was on. One of them was old and slow, and Mr Grisewood had pinned him down almost before he reached the gate. But the other one was fitter and before I knew what was happening I was chasing him past Zaks with two pupils. The chase led us into the housing estate below Mousehold Heath, and there we lost sight of him. As we searched the estate in our cricket whites, it began to dawn on me that it might be better if we didn’t find this potentially dangerous criminal, and eventually we returned to school empty-handed.
By coincidence, my final memory of this class is also cricket related. I was still teaching some of these pupils 4 years later when they were in U6. On the final Wednesday afternoon before Easter, SC arrived at the door clutching his pocket radio with a big grin on his face. He was delighted to tell me that England was hammering Ireland at the cricket world cup. He then went on to ask if we could listen to it while we worked through an exam paper. I normally dismiss such requests, but it was the last week of term, so I agreed that as long as everyone kept working, we could listen to the cricket in the background. Given the match situation, I felt it was very generous of me. Those of you who know your cricket history will know that by 4:00, Kevin O’Brien ensured this had become one of the best decisions I ever made.
What you might notice about these memories is they don’t contain any grades or exam scores. GCSE’s and A-levels might have been what we were aiming for, and they seemed like the most important thing in the world at the time. However, a decade later, I have long forgotten those results. When I think back to those days, it doesn’t matter how well or badly these pupils did. They were my first classes and I will always look back on them fondly because of that. My memories of them are not conditional on their grades.
Today’s Bible reading tells us that God’s love for all of us is similarly unconditional, and I still find this a difficult concept to get my head around. When I was a kid, I was firmly convinced of the complete opposite - that God would love me more if I was a good boy. I thought that every good deed that I did got me a step closer to heaven and every lie I told was step down towards the fiery furnace. But one of the most important messages in the Bible is that this simply isn’t the case. God doesn’t make his love conditional on good behaviour. Nor does he favour some people because they were in his first class. The peace that comes by knowing God’s love is a gift available to everyone. All we really have to do is to decide whether or not to accept it."
Ephesians 2:8-10

8 God saved you by his grace when you believed. And you can’t take credit for this; it is a gift from God. 9 Salvation is not a reward for the good things we have done, so none of us can boast about it. 10 For we are God’s masterpiece. He has created us anew in Christ Jesus, so we can do the good things he planned for us long ago.