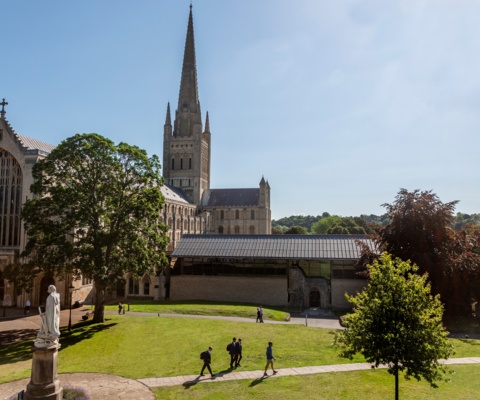 Dr Kirby Speaks to the Sixth Form About Leaving Home

Dr Kirby spoke to our Sixth Formers in assembly this week about his experience of leaving school and attending university. You can read his full address below:

"Before I begin, this is not a sob story. However, it is a brutally honest personal recollection of some of the stresses, anxieties, and (though not at the time in my case) excitement of leaving home. Yes, ‘Tis the season! to think about leaving to go to university. Something that, at your stage of my Sixth Form career, I was adamant about not doing. Not least because I was growing up in a close-knit family in the, now Banksy hotspot, of Lowestoft and being the first person, ever, in my family to even consider escaping the bubble that is Lowestoft.

What petrified me was the thought of leaving home. I was just not ready for it. The idea that after a particular date, my whole life will change completely in an instant and all the comforts of home-living would go, so-called ‘friends’ of the last 18 years will evaporate and I will, at the flick of a switch, be on my own. The thoughts of packing a bag and the moment of separation – and as I saw it, severance of a life comfortable to me - played on my mind, all the time.

The reason for this: I was not ready to leave home – far from it. Confused, shy and not knowing how I fitted in socially would sum me socially as a teenager and leaving home, leaving my mum and dad, was not something I wanted to do.

How would I eat (made more difficult by me being a fussy eater as a child and adolescent), clothe, wash my clothes, iron my clothes and retain the comforts I had grown accustomed to for the previous 18 years of my life? Not least, how would this look to others if I didn’t change? All those comforts would end if I went to university and that was something I was not prepared to happen anytime soon. No way. Not in a million years. I had told myself that I would follow the way of my cousin (who I admired growing up), in that I would do A Levels (because I like my subjects) and then leave and move into the world of work.

On the other hand, I loved the Sixth Form. I finally believed in the potential I was told I had was there and I massively enjoyed the subjects I was studying: Maths, Physics and Geography. My ambitions were to forecast the weather (an entirely mathematical problem) or to fly (also, an entirely mathematical problem) which linked my favourite subjects together. The step to university level education itself did not scare me at all, I was primed and eager for it and answering “how on earth can Maths go any further?” really did appeal. But leaving home at 18 I could not bring myself to accept.

I pause for a moment and look out at you and wonder how many of you have had similar thoughts, at least partially, to me.

Wednesday the 25th of December 2002 was beginning to be another fairly unremarkable Christmas Day for me and is one that none of you will know. I was in Upper 6, I had turned 18 and I was on for three As (A* didn’t exist!), but I had not much clue where I was headed when school ended that coming July. I had ordered and was flicking through an under- and post-graduate prospectus from the UEA (as I didn’t know what the difference was) when I chanced upon a huge breaking wave. I love waves. And as I found out, an entirely mathematical problem. I had found what my positive anchor would be for me, my degree course -Mathematics with Meteorology - itself.

Though close to home, I did manage to get enough courage to apply to stay at the university, in The Village residence complex. I would be in a flat with at most 8 students and en-suite facilities (something pretty uncommon at the time). This would be the toughest thing I would face as an adolescent – that pending moment of separation and turning my whole life upside down, that I so desired to avoid.

To keep this story short, my fears were completely wrong and my concerns disappeared the instant I opened the door to where I would be staying. Learning how to cook, wash clothes etc have completely changed me for the better. I easily made long-lasting friends: Colin, Kim, Amanda and I were THE group of mathematicians (with me as the smartest student, obviously). Not only that, I found the person that would resolve all my other issues (not least to my poor food consumption) and be 'The One' for me, within 6 hours of being at the university. In fact on the 22nd of September this year, we will have known each other longer than we haven’t.

In retrospect, I wish I had spoken out about my worries about going to university as the experience was hands-down the best thing I have ever done. I hated the “can’t-wait-to-go-university” syndrome many of my friends displayed that I couldn’t. The reality, though, is this is a giant step for everyone and regularly causes very talented students to discontinue their studies. Anyone is fallible and this is my fallibility. Talk about it. I wish I had; it nearly robbed me of a life I could only imagine – that would be worthy of a sob story."