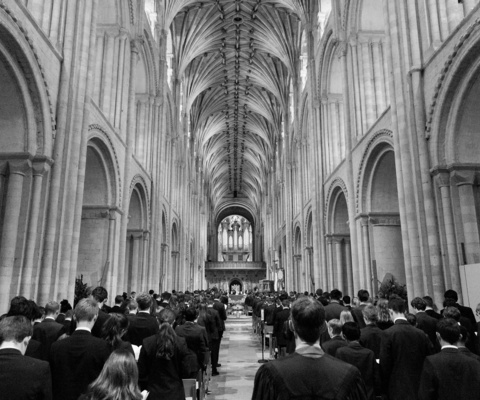 Mr Kettley speaks about the village of Oradour-sur-Glane

Mr Kettley, Classics teacher at Norwich School, visited the village of Oradour-sur-Glane with his family and spoke to the school in November about the importance of remembrance.

'On the 10th of June 1944, four days after D-Day, members of a Nazi SS regiment surrounded and entered the French village of Oradour-sur-Glane. The inhabitants were ordered to report to the fair-ground in the middle of the village. From there the men were dispersed to six execution sites and killed. The women and children were grouped together in the village church, and also put to death. In all, six hundred and forty-two people lost their lives, probably in reprisal for acts of resistance in the Limousin area of south-west France.

The Nazi troops looted the village and attempted to burn it to the ground. However, the walls of many buildings remained, including the church and some of the barns where the executions of the men were carried out. The French leader de Gaulle gave the order that the village be neither re-built nor razed to the ground, but should remain as it had been left, a memorial to the atrocities that had been suffered there. A wall was built round the destroyed village, low enough so that the buildings can be seen, but high enough to delineate it as a separate space; visitors are encouraged to walk through the village in a respectful silence. The village can be entered directly, or via a visitor centre, which sets out and contextualises the events and their aftermath. In the village itself, whole walls and streets survive, together with artefacts from the day on which the village was burned. Rusted ovens sit in what was the baker’s shop; sewing machines in a seamstresses; and a burnt-out Peugeot car that it is said belonged to the village doctor still stands in the fairground. It is possible to stand in the church where the women and children were killed.

I visited the village of Oradour-sur-Glane when on holiday with my family. It was a moving experience, and I have the following reflections on it. Firstly, the role of chance in our lives. How terrible to be caught up in events like this, over which one has little or no control. It has even been suggested that a different village, Oradour-sur-Vayres, was the intended target of the reprisal. A different type of luck for the inhabitants of that village.

Secondly, how hard it can be to achieve justice. A number of the perpetrators were tried, convicted, imprisoned and then released. Others were convicted but never served their punishment. A group of young men from the French region of Alsace were convicted of involvement at Oradour, but were released immediately through a nationwide amnesty for those who had been forced to join the German forces against their will. This was deeply resented in Limousin, the region in which Oradour stands, and shows how difficult it can be to balance just punishment for perpetrators of violent acts with justice for their victims.

Thirdly, the difficulty of forgiveness. It is clear from what survivors such as Robert Hebras have written, and from the subsequent history of Oradour, that forgiveness, while it may be desirable, is hard, and those affected may not be able to give it.

Fourthly, remembrance. One of the points of remembering is to ensure that intolerance, and the acts of violence it can breed, do not occur again. In the future, some of you may work or volunteer in conflict zones or troubled areas; but we should all do what we can to prevent intolerance, every day, in our school community and in our wider lives. Oradour, too, looks to the present and future, as well as to the past. There is a new village, also called Oradour-sur-Glane, inaugurated in 1953 at de Gaulle’s insistence. When we visited this summer, we had an excellent omelette in one of the local restaurants, bought bread and cakes in the bakery, and enjoyed a brief stroll through a typical modern and vibrant Limousin village. Despite being right next to the martyr village of Oradour, I can’t imagine that the inhabitants of the new Oradour spend all their time in remembrance of it. The wall round it means that visiting it, and remembering it, is a deliberate act, just as our own remembrance service and remembrance Sunday are times we set aside to remember and reflect on specific past events and people. The presence of the new Oradour-sur-Glane next to the old suggests that remembrance of the past should also involve looking at the present and the future, as an inspiration to what each of us can do, in large ways or small, to avoid intolerance and unkindness and make the world in which we live a better place.'