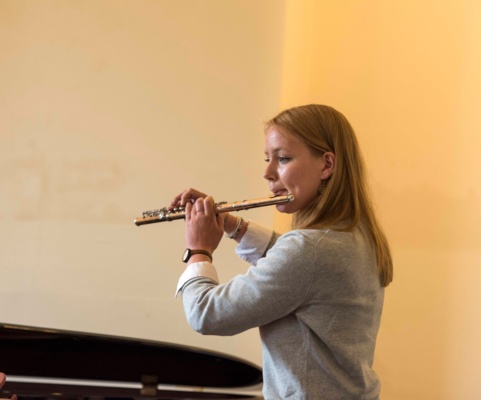 Millie Clark (U6) on Being Accepted Into the National Youth Orchestra

U6 pupil and Head of School, Millie Clark, was recently accepted into the National Youth Orchestra of Great Britain (NYO). She shares with us how her love for music has developed and how she became part of the NYO.

On 24th September I received the email with my acceptance into the National Youth Orchestra of Great Britain, which was incredibly exciting.  The NYO performs annually at the prestigious BBC Proms, and we take part in three rehearsal and concert tours throughout the year.  I had been involved in the ‘training’ orchestra, NYO Inspire, for a year, and this involved a concert at the Barbican in London with conductor Gustavo Dudamel.  In March the courses went online, where we explored the music of composers of ethnic minorities on Zoom and culminating in a virtual ‘performance’ of individual videos edited together.

I started playing the flute when I was in Year 4 because I wanted to join the flute choir at primary school with my friends. I loved it so much that this progressed to ensembles and orchestras on a Saturday morning in Bury, and then to the South and West Suffolk Youth Orchestras. At 11 I was accepted into the Suffolk Youth Orchestra, where I was Principal Flute from the age of 12. We went on a concert tour to Europe for a week each year, to Germany, Poland, Spain and Italy, and performed at Snape Maltings Concert Hall three times annually (once being as part of the Snape Proms).

Also in Year 7, I joined Aldeburgh Young Musicians, where I was a member for 5 years. This exposed me to all sorts of different music – Arabic music, folk, jazz and contemporary to name a few. I met some of my best friends here and formed a trio that performed at various local concerts and events. Through AYM I also met my incredibly inspiring teacher, Anna Noakes. I joined the Britten Sinfonia Academy in Year 11 where we played high-level chamber music alongside professional musicians.

I love inspiring younger musicians, and I performed as part of the Lullaby Concerts scheme in Newmarket, to primary school age pupils. We held a workshop afterwards where the children could try out new instruments and ask questions. I have given multiple solo and chamber recitals for Music in Felixstowe (some online over lockdown) and played alongside my teacher in Suffolk Sinfonia, where I will be playing 2nd flute in a concert in November.

Next year, I hope to study music at university or music college, and eventually play in orchestras, work in music education, perform as a soloist, and work on musicals and operas.