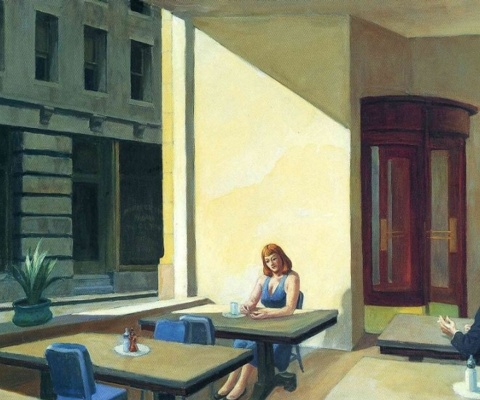 Members of creative writing club Writers' Bloc have been responding to a painting by Edward Hopper, Sunlight in a Cafeteria.

Here are pieces by four members of the club:

Sunlight in a cafeteria poem

Her face is stubborn with not a tear

Though inside her heart does flow

The room was still, her mind was clear

She sat with pride let it show

And calmly off away they’d flow

He begins to stand and she sees him appear

She saw his cloak, his scythe, his gear

He took her hand and held her dear

The sun comes through to burn the fear.

The gentle wind ruffled their hair as they sat opposite solid oak tables while the golden light spilled in from the open window. Music floated across to them from a street opposite them, calming the nerves that jangled in their souls. An appreciated mug of coffee sat in front of the individuals releasing the aroma across the polished cafeteria.

The muted honks of impatient cars sang in the distance like a pack of harmonised geese as doves danced with the clouds in a lazy waltz. The oak tables gleamed with pleasure as if they were welcoming the strangers to stay longer. A starched frown was drawn upon the man’s tanned face as he sat looking morosely out the open windows.

He stared deeply at the houses as if they held the secrets of the universe inside it while the woman next to his table fiddled nervously with her slim fingers. Her periwinkle-blue dress shimmered like the sea while her golden hair shone like the morning star. The dirt encrusted houses were a dark comparison to the peaceful café.

Neither of them had said anything yet. The lady was staring at the table. The man seemed to be staring into space. They were sitting at different tables. The man wore a black suit; the lady wore a blue dress.

She studied him carefully. She recognized him from somewhere.

The café was where she went to think. The sun would always beam down on her and it was so quiet and peaceful. She had been very surprised when the man had come out and sat on the table next to hers.

After a while, she replied.

After a few more minutes, the man stood up.

He tucked his chair in and left.

Sunlight in a Cafeteria

In this bright place

A man and wife

She holds a mug

‘What have I done?

She stirs the spoon

He scrapes the plate

“You tell me then

Let’s get this straight!

You tried to rob

You tried to steal!

The moon and sun

For your own zeal.

My love for you

Is but a chore.

You stole my heart

To your love I

Can you not see?

I didn’t steal them

They were for you

You are my moon

My sun and heart

And I can’t bear to be apart!’

Then there was quiet

All round the room

Her hair was gold

Curled her and there

Her eyes were grey

And shone so bright

In this here June.

Her eyes tested up

She gripped her cup.

‘I stole the sun

And moon for you

I love you so

Then with a scrape

And as they met

The sun had sunk

And in the sky

In synch once more

No longer a chore!

For he loved her

And she loves him

And in the moon