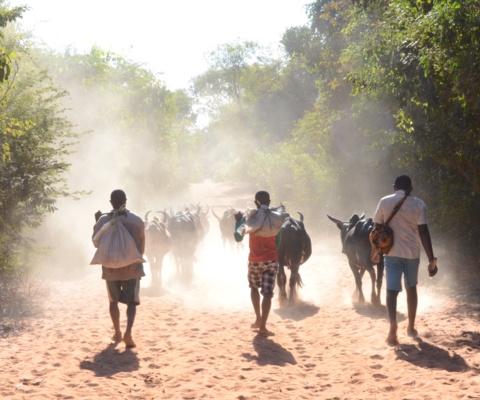 Eighteen Norwich School pupils travelled to Madagascar in the Summer holidays 2018, for a trip that was a opportunity of a lifetime. Pupils gained hands-on experience with research projects, studying the native species of Madagascar and Operation Wallacea's conservation efforts, whilst having informative lectures everyday as well as helping local scientists conduct survey's three times a day. Read all about the trip below from pupil Holly Herbert's (L6V) perspective.

Madagascar is not your typical school trip destination. It was an opportunity of a lifetime which we were lucky enough to have on offer, a great leap into the unknown for us all and it exceeded all of our expectations.

Eighteen of us, from ages fourteen to seventeen, ventured out for just over two weeks, travelling around the north-west areas of the country, seeing the dramatic mountainous landscapes, the remote dry deciduous forests and the beautiful clear waters surrounding Nosy Be where we dived and snorkeled around the coral reefs.

Madagascar is the fourth largest island on earth with over a hundred different species of lemur endemic to the country and it is regarded as ‘the hottest of the biodiversity hotspots’. Yet it is a country where wildlife research has only recently taken form, so it was quite a surprise to see the surveys that the scientists were having to carry out, which would have taken place years ago back home in the UK.

Our long journey began bright and early with the group of us catching a bus at 01:20 to Heathrow. We caught our first flight to Paris and, following that, a ten and a half hour flight to the capital of Madagascar, Antananarivo.

It was midnight when we finally arrived, everywhere still buzzing as the huge plane we travelled on emptied out into the tiny airport. The main concern then was whether or not we were lucky enough to have our luggage in the same country!

Our first night was spent in Antananarivo, where we stayed at ‘Manoir Rouge’, a small hotel, and one of our last chances to use electricity, running water and sleep in beds, which we didn’t all quite appreciate until we got to our forest camp that Sunday. It was exciting to wake the following morning to hear the loud talking and street noises from below as locals hurried to work and school, while shop owners cried out to try and attract people to their stalls. I don’t think any of us could quite believe we had travelled all that way to Madagascar. As soon as we were out of the hotel our eyes were peeled, taking in all the new scenery, so far from what we are used to back in the UK. Young kids unaccompanied by an adults, walking holding hands with one another on their way to school in a mass of people, completely safe and clearly a huge amount more street-wise than any of us. Cars, cattle and people colliding on the roads, and then displays of meat hanging on the road side as well as various vegetables and fruit stalls. People just going about their usual lives and there we were completely stunned and staring at the amount going on in such a small area and how fearless everyone seemed to be.

Our travelling around the island began with our week up in the north-west of Madagascar, near to Mahajanga, a coastal city. Getting there was an experience I doubt I will forget, being loaded onto a huge yellow truck and rumbling through the forest, when we happened to come face to face with a local tribe who turned on us very quickly as our truck nearly ran over their sacrificial Zebu, a first for all of us as spears were pointed at us!

Mariarano was the first camp we stayed at as part of our forest week and Matsedroy the second, where our camp was located next to a lake, home to a crocodile! The camps had basic facilities with water being precious and being pumped from a small well daily by locals and staff on site. A memorable experience was the first time we all had to use the bucket showers, Miss Cook shouting words of wisdom to us all as we tried to work out the best technique of washing with a bucket of water and a cup! It was also quite a surprise when you were occasionally joined by a snake or a gecko in the shower!

We all got hands-on with the research projects that the scientists were carrying out and gained insight into the native species of Madagascar and Operation Wallacea’s conservation efforts through a series of lectures. Surveys took place three times a day, where we looked at different species. A favourite was the butterfly survey where we all raced up and down a dusty track trying to catch as many butterflies as possible, which was made tricky with the scorching heat and red dust flying everywhere.

Before we left for the marine site we stopped off at the local village school. We had a warm welcomed as they all rushed to greet us and walk us up to the school. At the school the children sang and danced for us, something which we were also expected to do in return, but we were clearly beaten! We were also challenged to a game of football and we played duck, duck, goose with the children. It was a really happy afternoon and it was great to spend time with the local people.

Nosy Be was our marine site destination for the second week, located off the north coast, a long journey by bus and boat, but quickly forgotten about once we had seen the beautiful island and amazing coast. The surveys carried out at this site are based on protection of the coral and marine life. There is an increasing threat from locals and tourism to the reef, due to a lack of insight as to what lies underwater. Many of our group completed their PADI qualification with some also taking part in advanced qualifications. It was an amazing experience to snorkel and dive at Nosy Be, our enthusiastic instructors allowing us to explore the coral reefs and understand the importance of protecting this natural beauty.

The trip to Madagascar was one of the best things I have ever done and it couldn’t have been with a more supportive and happy group of people with everyone up for an adventure. Thank you so much Miss Cook and ‘Jungle Gent’ for giving up your time and supporting us along the way. You were the perfect accompaniment to an amazing adventure!"