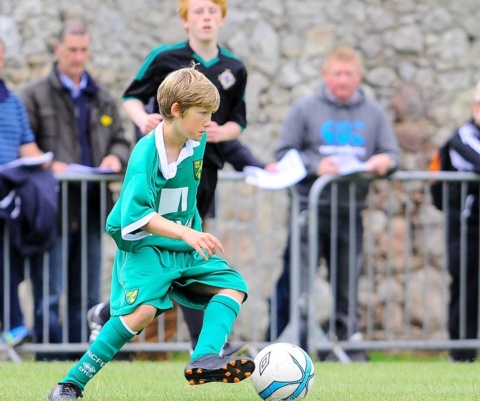 Norwich City and Young Norfolk Sports Academy member Josh Pond in Lower 5 tells us about life as part of the academy.

"I have been playing football for about 10 years now, starting at the Community Sports Foundation programme and then moving on to my local club, Thorpe Rovers when I was playing in the Under 6 to Under 8 age group. I was scouted by the Norwich City Academy when I was playing for Thorpe Rovers, joining their Elite programme at Under 8 and then signed for the Academy in 2009. I'm now part of the Under 14 squad.

My training schedule is pretty demanding, which means I have to be very organised to cope with everything that's going on in my life. This includes long days of double training sessions, as well as lots of homework from school. As I have become more familiar with my weekly schedule, I have found it much easier dealing with all these commitments and when I have to do them. The City Academy really help with keeping on top of everything by giving us a diary, in which we write what we have done that day - at school, at home, sports etc - so they can see the whole picture. This helps them to understand how we are performing and make changes to our training if necessary. My coaches, Jimmy Unwin and Adam Watkinson have really helped me to develop my game and are always setting me new challenges. This is complimented by the Young Norfolk Sports Academy programme, which covers topics such as nutrition, injury rehabilitation and working with the press.

During the season, I train on Monday and Wednesday from 3:00 until 8:00 pm. Then I train on Saturday morning for two hours and play matches nearly every Sunday. My match day on Sunday can vary from being a long day with lots of travelling, often to London, to a shorter day if we are playing at home. As part of the Academy Premier League, we play teams like Chelsea, Spurs and Arsenal as well as Ipswich. I also take part in strength and conditioning sessions, held by the Sports Academy. Overall between school, football and everything else, I have a very full week.

As part of the Norwich City Academy, we are lucky to get the chance to travel - so far I've played in France, Holland, Ireland, Austria and Germany. This year, I had the opportunity to go on tour to Germany and Austria as part of the under 14/15 squad and I took part in the Sonnenland Cup indoor football tournament in Passau, Germany. The tournament attracted top teams from all over Europe including Bayern Munich and Borussia Dortmund, as well as more familiar opponents in the form of Tottenham.

In the tournament we topped our group, going through to the quarter finals unbeaten to face FSV Mainz 05 but sadly we lost 3-2 to a goal from outside the area, scored with literally the last kick of the game. Overall, it was a great experience and we learned lots about the different styles of football played across Europe. I am looking forward to going again next year and I can't wait to give it another shot - hopefully going all the way next time!

More recently, I picked up an injury playing against Chelsea so have been working hard on my rehab with the physios at Colney - they're brilliant! I should be back training in a couple of weeks and hope to be fit to face Chelsea again!"