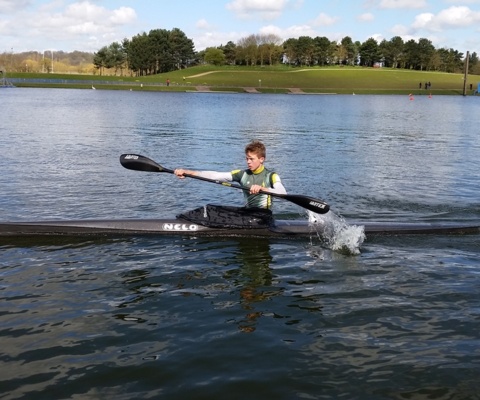 As written by Luke Shaw (U5V) and featured in the EDP. Young Norfolk Sports Academy is an initiative led by Norwich School to enable young athletes in Norfolk to maximise their potential.

This is shaping up to be my best season yet. Over the winter I have been doing lots of preparation for the coming racing season which started in May. I have been training more than ever and have spent nearly 3 weeks abroad on training camps in Portugal (kayaking) and Czech Republic (cross-country skiing to improve my cardiac fitness). The Young Norfolk Sports Academy (YNSA) has played a vital role in my training this year - alongside the fantastic support of my coaches and parents. Since joining YNSA last year I have been able to meet and share experiences with other athletes from different sports and have attended many workshops which have been really useful. I found the workshop by physiotherapist Lisa Hayward on Functional Movement Screening particularly helpful, and the personal programme of exercises she put together gave me crucial focus in the run up to the race season. The psychology workshop by Juliette Lloyd on setting achievable goals and self-belief was also very useful and thought provoking. Another benefit of the YNSA has been the access to the UEA Sports Park facilities where I have been using the swimming pool for additional, varied training.

Recently I have done two marathon kayaking races, one in Norwich as part of the regional and national Hasler race series where I came 3rd in my first race in Division 2 (I was 3 and 10 years younger than the men in 1st and 2nd places). The second was a national assessment race in Reading where I came 7th in the U18 race, with only 4 seconds separating 4th and 7th over a 24km race, which was great as I still have 3 years to get to the top of the field - and ultimately represent Great Britain at European and World Championships.

In a couple of weeks, I am competing in a K2 (2-man kayak) assessment race for GB selection for the European Championships. As for sprint, last week I had a regatta in Nottingham where I was aiming for promotion to the Boys A category, which I am pleased to say I achieved following two comfortable wins in the 1000m and 500m K1. I will also be targeting several medals at the national sprint regatta in just over a month and I will be aiming high for the Marathon National Championships in a July.

Following my performance at my national assessment race in Reading and my K2 race in Burton, I am excited to have been selected to race for Great Britain in the coming World Cup in Portugal which will be my first international competition against some of the best athletes from all over the world. The training over the last months and the help from coaches and YNSA mean I am well prepared. In the coming few years I hope that, with continued involvement with the YNSA programme, I will be able to reach my full potential at national and international level.