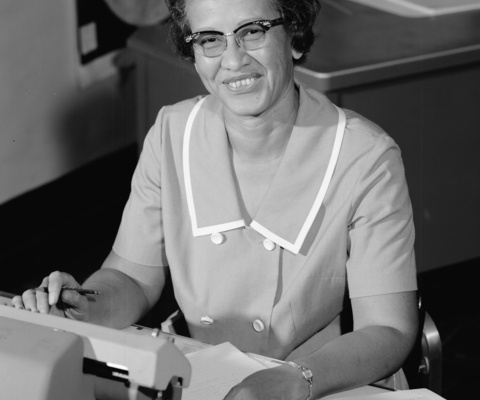 To mark Women's History Month, we will be releasing several blog posts from pupils and staff discussing inspiring women from throughout history. On International Women's Day, we start with a post from Imie James (M5), who reflects on the significance of Katherine Johnson's contribution to science, technology, mathematics and computing.

When I look up at the night sky, I always find myself thinking about the bravery and legacy of Katherine Johnson. As a supremely gifted American mathematician, Katherine is a powerful symbol of the often unrecognised contributions that women and minority ethnic groups have made to science, technology, mathematics and computing during the twentieth century.

Born on August 26th, 1918 in West Virginia, Katherine entered high school at age 10; her level of skill and intelligence with numbers already obvious. In 1939, she was one of the first three African American students to enrol at West Virginia University to study maths. In 1953, she became one of a group of African American women, who became known as the 'West Computers', working at the National Advisory Committee for Aeronautics (NACA). Although their data analysis skills and accompanying mathematical computations were crucial to the success of the US Space Programme, they were segregated from their white colleagues and forced to use separate bathrooms and dining facilities. Thankfully, when NACA became NASA in 1958, these unacceptable conditions and segregation were stopped. As a member of the NASA Space Task Group, Katherine's calculations of orbital mechanics were critical to the success of the first spaceflight that put the first US astronaut into space. Before this, she made history in her division, being the first woman to receive credit as a co-author of a research paper which she had worked on with a NASA engineer. She went on to write a further 26 papers. As part of Project Mercury, in 1962 the astronaut John Glenn became the first American to orbit Earth. Before his flight, he requested that Katherine personally check, by hand, the trajectory equations for his flight that had been calculated by the IBM 7090 computer. This proved to be one of her most significant achievements. Johnson was also part of the team that calculated where and when the Saturn V rocket would be launched that would send the first three men to the Moon (Apollo 11). Before retiring from NASA in 1986, Katherine spent the last years of her career working on the Space Shuttle. Her work as one of the first African American women to work as a NASA scientist was acknowledged by the agency as being historic. In 2015, she was awarded the Presidential Medal of Freedom by Barack Obama, for being a pioneering example of African American women in Science, Technology, Engineering and Maths (STEM). Katherine died on February 24, 2020.

For me, Katherine Johnson is an inspirational woman for so many reasons. Through her hard work, talent and perseverance, she broke negative stereotypes regarding race and gender in the workplace, and demonstrated what women can do in STEM subjects, helping to erase the gender biases and stereotyping regarding girls not being good at maths. By breaking down barriers that continue to block women’s progress, as shown by their under-representation in STEM fields, Katherine demonstrated that no obstacle is too hard to overcome, you can succeed. People doubted her because she was a woman and because of the colour of her skin. Her persistence and determination to succeed is truly inspirational!

As Katherine once said, "I counted everything. I counted the steps to the road, the steps up to church, the number of dishes and silverware I washed...anything that could be counted, I did." So, in your honour Katherine, I'm going to keep counting the number of girls studying STEM subjects, and the number of female scientists, from all races, that we see in our textbooks and in the headlines, counting the days until we reach equality. I am proud to follow the example you set.