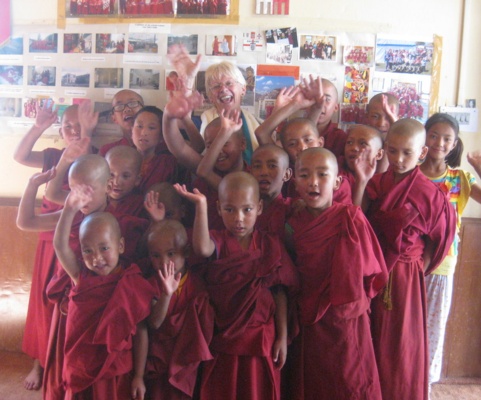 Valpy House once again raised a good sum of money for the boy monks of GTC Monastic School.  This year it was supplemented by a sum raised by Nelson House, too.  I presented the overall sum of £400 to the School when I visited in July.  My heartfelt thanks are due to Mr. Bateman and Mr. Beford-Payne and their House members.  Last year's monies were spent on food, school equipment and better health-care.

To keep faith with all the busy fund-raisers, I also donated goods such as a fridge, water filter and small cooker, as well as assembling the items for a first-aid kit to be kept near the kitchen.  (I thought this necessary after one of the boy monks, Tundup, fell and sliced his arm open nearly to the bone.  Ladakh is a hard place to fall!) The boy monks are in good health, full of energy and high spirits.  The skin condition which the younger monks had last year is very much improved, and Lama Lobsang Dechen is being very fastidious in washing clothing and bedding.  A black cat has taken to hanging around the kitchen - the boys have called it Kali and are very fond of it, as is the cook, Govind.

The Director of the School is now Lama Chamba Tsultim, ably helped by the School Secretary, Lama Lobsang Dechen.  Gen (Teacher) Sonam Gonpo is still at the school, as well as Gen Jigmet Dorjay.  Two teachers with the title of Geshe or Kachen (Doctor of Divinity) are now also teaching at the school, delivering a higher level of knowledge of Buddhism, and this is regarded as exciting and prestigious.  They are Geshe Tenzin Chosphel and Kachen Tenzin Tsephel.  Science has now been included in the school curriculum and has become a favourite subject of the boy monks.

I was able to teach two lessons to the senior pupils.  One was on compassion, illustrated by the story of the Bodhisattva Avalokiteshvara and the Parable of the Good Samaritan (which was acted out with great enthusiasm by the pupils).  The other was on the Buddhist Wheel of Life, a key teaching on what might happen after death (and which produced no small amount of boredom, can't win 'em all).

While at Disket Monastery, most of the senior monks and the pupils of the School went to listen to teachings given by Ganden Rinpoche at Samstangling Monastery further down the Nubra Valley (on the Panamik side).  We sat under apricot trees with apricots falling onto us from the high branches.  They were eaten with relish!  On the way back to Disket Monastery, we stopped at Ensa Monastery to visit Gen Namgyal - the cool monk who used to have a Royal Enfield motorbike.  He is feeding the local foxes, and it is the first time I have seen a Ladakhi fox!  It looked a lot lighter than our red fox.

I had time during my stay to explore much further up behind Disket Monastery, keeping to the left of the gorge but making my way closer to a snow-capped peak I've glimpsed from afar for many years. Still some exploration to be done there, I think.  I would have liked to have trekked out of the Nubra Valley from Hundar to Phyang, but Dorje (the travel agent who organised all the Norwich School trips) couldn't get the necessary team of pony-men, cook and guide.  Another time. The Dalai Lama at Thiksey Monastery:

His Eminence, Kushok Thiksey Rinpoche of Thiksey Monastery, hosted a visit by His Holiness, the XIVth Dalai Lama, who consecrated the new photang (assembly ground).  He also gave teachings on three mornings;   these were well-attended, with the last morning calling out the local faithful in their tens of thousands to receive the Avalokiteshvara initiation.  Our trekking guide from previous years, Lotus, was there with his family.  At the end, local people in traditional dress processed past His Holiness to have scriptures blessed by him.  Again, most of the senior monks of Disket Monastery (and many other monasteries) and all the boys and teachers of GTC Monastic School attended these teachings.

The Dalai Lama is meant to be visiting Disket Monastery next year to give teachings; to that end, I saw that new buildings were being built at the end of the photang there.  A new shop has been built, as well as a restaurant and guest accommodation.  Accommodation has also been built at the lower level of the monastery for the older monks who are too infirm to climb the steep hill and steps to their accommodation high up on the mountainside.  Many domestic tourists are visiting Disket Monastery, raising a lot of revenue.  They are also happily buying items from the shop which is generating a surplus, too. Government and other support for GTC Monastic School:

One day, quite unexpectedly, the Head Teacher of the Central Institute for Buddhist Studies (which sets the curriculum for all monastic schools), Gen Nawang Gyatso, turned up to visit GTC Monastic School, along with the Joint Secretary for the Government of India's Ministry of Culture, Mr. Srivastava.  The latter has promised to provide more support to the School which is tremendous news, and I just hope that it does actually happen.

The Professor of Nuclear Physics from Prague University, who styles himself Norbu while in Ladakh, was also visiting GTC Monastic School.  Norbu has been a major supporter of the school, also of Disket Monastery for many years.  A Czech organisation called MOST attracts sponsors for each pupil of GTC Monastic School, and Thomas and Suzanne (from MOST) visited to give letters and gifts to the boys from their sponsors.

A team of Czech conservators was working on restoring a shrine room on the uppermost level of Disket Monastery.  As always, funding for this project remains tenuous (there are so many frescoes in Ladakh which need conserving) and the professor in charge, Dalibor, is trying his best to attract more.  He takes a team of students to Ladakh most years. As I was in Ladakh for a month, I had time to visit Phyang Monastery, about 15 km from Leh, for their traditional festival, featuring the display of a huge thangka (painted religious banner) and also cham dances, masked dances telling stories of good defeating evil.  I also went for the first time to the beautiful Zanskar Valley.  It takes two days by jeep to get there; Leh to Kargil on one day, and Kargil to Padum on the other.  The scenery was spectacular:  the Nun-Kun range, many glaciers, the Pensi La pass, Rangdum Monastery . . . I have wanted to visit Phugtal Monastery for years and finally made it.  With Lotus, my guide, we trekked five hours there, stayed overnight, then five hours back.  Phugtal Monastery is set in a cave with buildings cascading down the mountainside; it is only possible to get there by trekking.  The nearby river was turquoise blue in amongst the stark brown landscape.  The whole area is cut off for about eight months of the year during the brutal Ladakhi winter.  Lotus and I ate tentuk (a favourite Ladakhi dish) in a kitchen darkened by smoke since mediaeval times).  Our visit was all too brief.

Dorje and I did a couple of walks.  One was fairly strenuous, exploring the area up behind the Charu Palace Hotel, which he is running (along with his partners, Naveen from Delhi and Phuntsog from the Da-Hanu region) with great success.  We walked along a rocky ridge, ending up just down from Leh Palace.  On another day, we climbed many, many steps up from Hemis Monastery to a meditation cave, enjoying the beauty and the stillness of the narrow valley. While I was in Ladakh, a serious political situation arose in Kashmir leading to violence and curfew.  This impacted tourist numbers in Leh from Srinagar (in Kashmir) and affected the delivery of goods and services from Kashmir.  The domestic Indian market was strong enough to create enough business, but there is no doubting the negative impact of the unresolved Kashmir situation on tourism in Ladakh.  The situation is ongoing, deriving initially from Partition in the 1940s.

The strangest of coincidences:  I was sitting in Cafe Wonderland in Changspa, Leh, when who should tap me on the shoulder but Ed Chalmers, ON (class of 2013). He was visiting India prior to going to Bali.  We met up a couple of times and shared a jeep to the airport.  As we flew over the Himalaya, the pilot gave us a wonderful commentary on what we were seeing below us.  Then there was cloud.  Then the pilot announced chirpily that we had had engine trouble but that everything was OK now - not the news you want to hear when there is no possibility of a soft landing!  I was able to speak with the pilot in Delhi, and he - again with great good humour - said that he hadn't told us the half of it! Not what you want to hear! The future of our link with GTC Monastic School:

At this moment, I am not sure if I will return to Ladakh next year.  It would be wonderful if the connection with GTC Monastic School could be kept up, but I have been going there for ten years now and think it is time spend more time in Scotland near my family for a change, or visit European countries in the lovely summer months.  Or maybe just enjoy my own garden in the little summer that we get.  It would be wonderful if someone else would keep up the link, and I would be happy to give advice on travel and to help make arrangements.