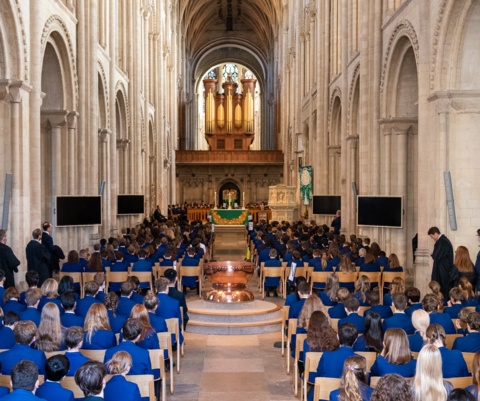 At the start of Trinity Term, Head Steffan Griffiths addressed pupils in assembly. You can read his address below:

"Welcome back to School; as ever, it is good to have everyone together again. I hope you are feeling refreshed and ready to take on the breadth and quality of opportunity available to you. We finished the Lent Term earlier and are coming back straight after what has been an exceptionally late Easter to ensure that we can give as much meaningful preparation to our public exam year-groups and their teachers as possible.

This time of year has been unusual in terms of dates for another reason: three of the world’s great monotheistic religions, Christianity, Judaism and Islam, have all celebrated significant festivals at the same time; this is the first time it has happened since 1991.

Christians commemorated the crucifixion of Jesus on Friday and on Sunday celebrated Easter, marking their belief in his resurrection. On Friday, Jewish people celebrated Passover (the Eve of Pesach), which commemorates the exodus of the Israelites from Egypt and the end of their slavery. Muslims around the world marked another Friday, their weekly holiday within the month of Ramadan which begins on April 2nd or 3rd and ends on May 2. Muslims believe that God revealed the first verses of the Quran to Prophet Mohammed during the ninth month of the Islamic calendar around 1,400 years ago. Literally, the word Ramadan derives from "al-ramad" which means intense heat or fire and symbolizes the hardship of fasting and the burning of sins.

The coincidence of dates is unusual, especially as far as the proximity of the Islamic Ramadan to the Christian Lent or to the dates of Pesach and Easter is concerned. This rare conjunction of holidays is possible because unlike the Christian calendar, which is determined by the course of the sun and is widely used in the Western world, the Islamic calendar is aligned with the moon and the lunar year. Twelve months in the solar year last 365 days; in the lunar year, on the other hand, it lasts only 354 days. Thus, the Islamic cycle of holidays moves across the Western calendar over the course of a good three decades.

The shorter course of the year offers Muslims the chance to experience Ramadan as well as other festivals in different seasons and different climatic conditions. The Jewish holiday of Pesach and the Easter date of the Western churches, on the other hand, always occur quite close together in early spring. However, they do not often fall on precisely the same date. The difference is due to the fact that the Christian calendar dates Easter to Sunday since the year 325 CE, more specifically to the first Sunday after the spring full moon. In the Jewish calendar, on the other hand, Passover can begin on any day of the week.

So, all in all, a significant variety of practice across countries and faiths. It is important that Norvicensians are informed about cultures other than our own and respectful of traditions which may not be familiar to us but may be important to others in our community. Such openness takes in opinions as well as practices: we may not always agree with each other, but any difference should be respectfully articulated and expressed, based on an understanding of someone else’s position. All too often in the modern world of polarising politics, headline-seeking journalism and online echo chambers, there is a desire to set up opposition, an “us and them” culture, and this is usually based on ignorance and misunderstanding.

Perhaps the most famous symbol of prejudice being broken down is the World War One football match between German and Allied forces at another religious festival, Christmas. However, there are numerous other examples from situations as varied as schooling to urban unrest: for example, those in mixed neighbourhoods have been shown to be less likely to participate in rioting, while a study in the US Navy in World War Two demonstrated the acceptance black servicemen on US boats in a 1938 study improving proportionally with the number of mixed race voyages undertaken, from under 20% for those with 0 voyages to more than 80% for 4 or more voyages. Small steps, maybe, but clear evidence of something that seems intuitive, that we are more likely to understand and be compassionate to people that we know and with whose customs we are familiar.

The psychological notion behind it is called Contact Theory. Through approaching other cultures from a position of open-mindedness, curiosity and humility, we give ourselves a chance of fulfilling the exhortation in today’s bible reading: “we spur each other on towards love and good deeds”. Whether it is Easter, Passover, Ramadan or none of the above, respectful understanding enables us to enrich ourselves and make a positive contribution to the lives of those around us.

I wish you all well for the coming term."