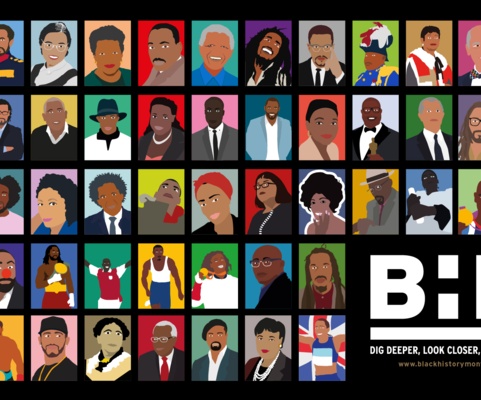 "This morning’s assembly is all about Black History. I have a lot to cover so some of it may be a bit of a whistle-stop tour, but bear with me! Ms Roper’s assembly last week gave a really great insight into Black History Month and its origins, however just to recap:

The man in the photo here is the mind behind it all. His name is Akyaaba Addai-Sebo, a Ghanaian analyst. He served as a coordinator of special projects for the Greater London Council and organised a collaboration to get it underway in 1987. The event grew and ever since, the country has recognised and celebrated contributions of black people to society.

Now, to take you all back a bit further, I wanted to highlight some key things in Black British History that I discovered only very recently.

This is Hadrian’s wall – a key monument from the Second Century. In a Cumbrian village near the west end of the wall, it was discovered that, a century after it was built, African Roman soldiers were stationed here in a fort. It has also been noted that these soldiers settled and raised families here. They were the first known African community in Britain.

I owe all credit to this information to historian David Olusoga’s documentary Black and British: A Forgotten History. In the documentary he wondered why there is no trace of these families and their descendants today. That’s where this man comes in – Cedric Barber. The descendant of a Jamaican-born slave. It was only recently that he became aware of his heritage, however it paints an interesting picture within Black History. The results of inter-racial marriages caused the black heritage of many members of the population to be erased.

This other image is one that also caught my eye in the documentary. It is of trumpeter John Blanke from the early 16th century at Henry VIII’s Tournament, a big extravaganza on New Year’s day of 1511 when Catherine of Aragon presented her husband with a son. A day of great celebration!

There are so many interesting ideas, questions and concepts that came out of watching this documentary. In one early scene in the first episode, Olusoga speaks to Mary Beard, a well-known classicist. I noted a statement she made in their conversation. She says: “I think we believe the myth that we have got less and less prejudiced over the years and that’s simply not true.”

When I heard this, it made me ask myself: ‘so what happened between then and now that made it all go wrong? We had these populations of black people and representation in the royal court - Where did prejudice and inequality come into the picture?’

Beard went on to say: “One of the lessons the Romans have for us is that some of the prejudices we hold haven’t been held forever. There’s something a bit optimistic about that - it might mean that we won’t go on holding them one day, who knows?”

One thing that I would like you all to take away from this morning is the answer I gave myself to my questions: that’s for history to know and for us all to find out. I’m sure you have heard the quotation, or a version of it, from philosopher George Santayana which reads “those who cannot remember the past are condemned to repeat it”.

As an aside, I really encourage you all to watch this documentary on iPlayer. It’s super engaging and packed full of information that I’m sure will be of interest to you.

Melody Triumph, policy specialist at an organisation called The Black Curriculum, puts it well in the context of the school curriculum. She says “lf you're omitting different histories and narratives, you're saying that these people aren't part of this country, this nation, this heritage - or they're not important enough to be taught as common knowledge." This can be translated into the context of wider society and our general understanding and appreciation of history as a society.

To emphasise my point further, how many of you have heard of the musical Hamilton? It’s a musical that tells the fascinating story of the lesser known Founding Father of America, Alexander Hamilton. In the closing song, the eldest Schuyler sister Angelica, says:

And when you're gone, who remembers your name?
Who keeps your flame?
Who tells your story?”

This, for me, is what Black History Month is all about – telling stories of, and celebrating, the great contributions that black people have made to form the country we enjoy today; stories that the history books have denied us; the roots of these people and their narratives.

So this morning, I wanted to briefly give you some insight into a significant part of Black British History and contributor to British culture in general, Notting Hill Carnival - an event of really interesting origins.

The year was 1958 and the number of Caribbean immigrants was on the rise, particularly in the Borough of Kensington – Notting Hill to be specific. This angered a lot of the white community, especially the group of white nationalists called the Teddy Boys. One day, an interracial couple were having a heated argument in the street. The argument attracted some attention and unfortunately became a catalyst for racially motivated attacks carried out by the local white nationalists. The following few days more young white men joined to riot, attacking the black residents and throwing firebombs at their homes. The events lasted over a week. The next year, politician Oswald Mosley used the climate to incite more hatred. He ran for MP insisting that he will return Caribbean people back to their country and ban interracial marriages. Needless to say, his political career was not one of merit.

Fast forwarding some time, the black Notting Hill community sought to show their white neighbours the cultural richness that they could provide. A woman named Claudia Jones decided to organise the London Caribbean Carnival.

Carnival for them was a celebration of freedom and expression – there was music, pageants and lots of great food. It took place every year between 1959 and 1964 (the year of Jones’ death) indoors in St Pancras Town Hall. Later in the year 1966, an annual festival influenced by Jones’ creation was launched by a community activist, Rhaune Laslett. Each year, more performers were invited, more stalls were set up, more food was prepared, more people attended and the event developed to become the Notting Hill Carnival we know today. An August bank holiday weekend full of dancing and celebrating through the streets of London with friends and family.

So going back to my ‘why’ from before, we didn’t exactly cover why embracing a multi-cultural society itself is important (apart from the history)?

It’s simple. Society would be boring if we were all the same. Diversity brings richness. In your life, you will come across people with different ideas, customs and beliefs to you – we all need to be accepting and understand where people are coming from. In school, at university, in the working world, wherever you find yourself, you will come across people who aren’t from the exact same background as you; prepare for it. Be interested, care about people and what defines them.

I hope you have found this morning interesting and learnt something new. Just to plug it again, do go and watch David Olusoga’s documentary – I promise you will enjoy it."