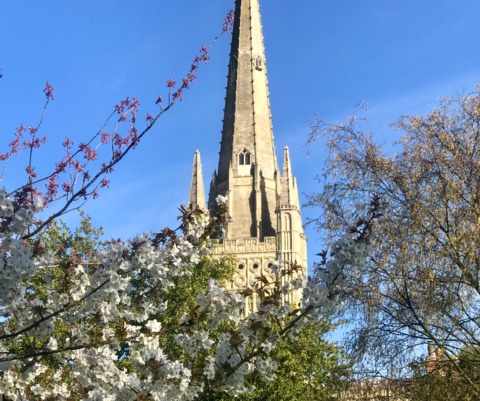 On Friday, pupils heard from the Head Master in the End of Term Assembly as they left for the Easter break...

The last 12 months have taught us all to expect less and accept more, the bewildering scale and frequency of change in our circumstances not permitting anything other than a Stoical approach. And so it is that we came to the end of a term that in some ways has lasted 3 weeks and in others feels like it has been going on for a whole year.

In doing so, we must acknowledge those and that which has been lost in the pandemic; the memorial in front of me is a powerful reminder of the individual sadnesses caused by Covid. I hope that you and your families continue to keep themselves and others safe over the holiday.

Regarding our community’s response to the pandemic, I continue to be in awe and admiration. The adaptability, determination and positivity have been striking and humbling to see: the industrious approach to schoolwork; the impressive logistical and physical efforts in Cup Run; the number and quality of our creative films, both in lockdown and since our return; the enjoyment of intellectual clubs such as MUN, Debating and Ethelbert; the food donation projects and care home collaborations; the seamless transfer online of admissions and induction processes. Thank you and well done to all, but particularly to our public examination candidates who have processed a turbulent time, mostly calmly, but always with dignity and an undeflected sense of purpose. We wish them well as they get some rest but also consolidate material in the coming weeks.

You will know that I like to break up the monotony of my words in end of term addresses with pupil performances. I should like to pick two from the 'In Other Words' concert which was released this week. It comprised of songs and poems in other languages and suggested an element of celebratory diversity in our school: we had everything from French poetry to a song about TikTok in Tamil.

Daniel Possener is going to start by singing a song in Yiddish, Yiddishe Mama.

The next song is one that I heard here in the Cathedral soon after our return in March. It was a moment that crystallised for me the irreplaceable joy of having you pupils back in Cathedral Close, making the most of the opportunities available here.

I am going to close by taking you back to words that I said at exactly this time, the Lent End of Term address, in 2017. The context is that we had just heard another pupil performance.

A final thought from me: Pop Choir is a group of girls but I am also delighted that an a capella group of boys in M5 has sung at the opening of the Blake Studio earlier this term. We saw yesterday at Cup Run an example of boys and girls at all levels of the school trying their best and supporting each other. At a time of a hardening global discourse in respect of equality and diversity, it is important that we reflect on the ethos of Norwich School being a loving, compassionate community, particularly at this time of year when the Easter message of self-sacrifice in the name of love is emphasised. I want Norwich School to be tolerant of diversity, but not just because I want to avoid problems connected with the Equality Act and protected characteristics. I want us to be good at issues such as gender, sexual orientation, and ethnicity because there is great power in harnessing the power of such diversity. [The Head of School’s] address earlier in the term talked of a request for tolerance and understanding; I agree wholeheartedly with that but would add the carrot of greater productivity and benefits. Don’t get more women or ethnic minorities or members of the LGBT+ community onto FTSE boards, parliament, High Court benches, expecting them to behave like the existing white, male patriarchy. Do it to celebrate and benefit from their different experiences and expertise.

Finding this extract from 2017 both pleased and saddened me: pleased that there is stability and continuity in the inclusive values of the school and that conversations have been happening here for some time; prejudice and unkindness on grounds of race, gender or sexual orientation have never been acceptable here. However, I am also sad that there is still so much more to be done, both here in our community and in the wider world. There are too many negative experiences being reported in 2021 for any of us to be comfortable.

As we all discovered with the response to the Black Lives Matter movement last year and are finding out again now in the wake of Sarah Everard’s murder and discussions about male violence, sexual misconduct and everyday sexism, our values are held in actions, not just in words. We are not a loving, compassionate community because I say that it is so from the pulpit. Such a community exists because it is created, nurtured, protected and defended. I remain committed to Norwich School actively standing against prejudice of any kind and I look forward to working with you all so that it becomes a part of our everyday behaviour. The Bible reading encourages us “to live in harmony with one another”; let’s work out together how to do this in practice.

As I suggested in my comments in the assembly at the beginning of the week, to do this people like me need not to talk, lecture or advise at this time; we need to listen and understand so that we can help to make things better. So I finish with words from another Head. She is Dr Helen Pike, the Head of Magdalen College School, Oxford. Her advice to the boys in her school in an assembly last week was as follows:

“I respectfully ask that you have the confidence to ask your mother, sisters, female friends and others what their experiences are. I’ll wager you’ll find it eye-opening, and I am confident that you’ll want to be part of the solution.”

Good wishes to you all for your holiday.