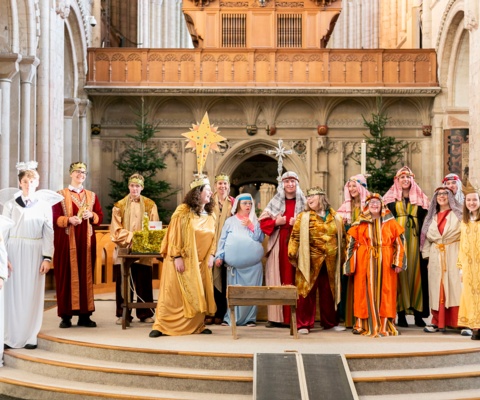 At the end of the Michaelmas term, Head Master Steffan Griffiths, spoke to staff and pupils in his end of term address during final assembly:

Well done to everybody on getting through to the end of this, the longest and darkest of our three terms.

In reflecting on the second half of the Michaelmas Term, I have been focused on the effect of daylight, or rather its absence, on our community. No matter what we do with half-terms and end of term dates, it always feels as if the run-up to this service becomes somewhat attritional, with the happy autumnal days of us skipping around during the inspection giving way to the timetable being something of a burden. Off to and back from school in the dark for many of you, the weather either cold or wet or both. Yet another GCSE assessment objective. And so on.

It all calls to mind those educational buzzwords of grit and resilience, with their implication of the teachability of character. However, I should like to remind you of happy situations which have taken place in recent weeks.

For a start, there have been the Christmas stories themselves. As well as hearing the Nativity story in our own Service of Nine Lessons and Carols on Sunday, I have so far witnessed five representations of the story:

Grit and resilience are certainly in evidence at this last service; a couple of minutes there puts into perspective any winter-related gripes or self-indulgent concerns I might have, such is the obvious and considerable struggle that so many participants have to negotiate in their daily routines in a way that you and I take for granted. However, it is not pity or regret that hangs over the gathering; far from it: the overwhelming feeling one gets is a pure, strong sense of joy and love, both from the young people and their carers. It is humbling and uplifting at the same time.

Yet it is not the only time I have had that simple sense of a positive emotion this term. It was there when we heard the Wind Band play at the end of our service this morning or Magnum Mysterium as our introit this afternoon; it was there when I was watching some of the extraordinarily accomplished performances in the junior dance festival; or listening to the solos of Alex Dixon and Dan Possener in the Remembrance Service; witnessing the exuberant energy in the Fame cast’s performances; seeing the U13A rugby team fight-back to draw against Beeston Hall or hearing a report of the 1st XI girls hockey win against Greshams in the tier 1 national hockey cup; even seeing my L4 Latin class enjoy getting hold of a new linguistic concept.

And all this in the dark, second half of term. I have read that a new word is going to challenge grit and resilience as the key quality schools should be imparting to young people; it is zest. Zest is defined as “An approach to life with anticipation, energy and excitement”; it is thus the idea of having the enthusiasm to get stuck in, to see the best and make the most of things. This is an approach that many of you have already and it is certainly one in which Norwich School believes. Zest involves taking joy in life, surely a key idea in the Nativity story where life is so vividly encapsulated in the form of a baby.

I am not saying that I want you all now just to be full of zest this Christmas; not only is such an encouragement too open to adolescent parody, but I suspect that would be rather tiring. I am not even sure I like education being distilled down to one word; things tends not to be that simple. We are more interested at Norwich School in holistic provision, developing a range of skills and approaches to help you navigate the variety of experiences with which you will have to cope, both while you are at school and certainly once you leave Cathedral Close. However, I hope that the idea of zest will encourage in you an openness to new ideas and a desire to make the most of the opportunities you have.

In all of this, a school’s role is to provide opportunities of different types and give young people the opportunity to try their hand at them. Whether one focuses on grit or zest, rather than seeking directly to teach character the school should model underlying values and invite pupils to discover their own character through their reaction to particular situations within a context of that value system.

For me, that certainly involves walking out of the West doors in the July of U6 ready to give rather than ready to take. This seems to be a key message after last night’s election result, regardless of your choice of political party. Don’t worry, I am not going to get dragged into an unseemly rant, but institutions like ours retain their relevance if our leavers seek to make a positive contribution to society. We live in a world of centrifugal politics where the rhetoric is hardening. Whether local, national or global, we need communities to get closer together rather than move further apart and it is my sincere hope that Norvicensians of all generations will be binding agents, acting for good across the full range of sectors and at all levels of society. Having a mindset of “anticipation, energy and excitement”, our definition of zest from earlier, is not a bad way to approach this 21st century challenge.

So, in conclusion, may your view of life be zestful, but your upcoming holiday restful (ho ho). I wish you and your families a happy Christmas.