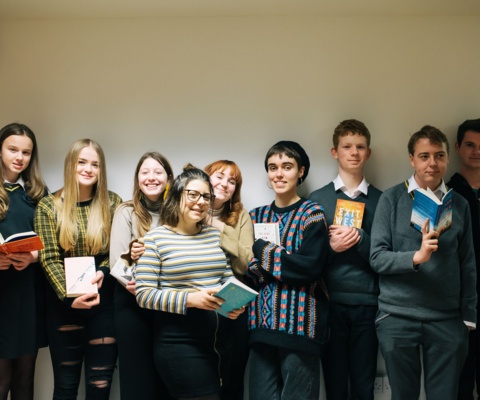 Norwich School pupil, Billy White, has had a busy year organising Engage! Handover Festival with the National Centre for Writing. The Engage! Handover Festival is a project funded by creative Europe, managed by the National Centre for Writing. The NCW programme team have been supporting a group of 15 x 14-17-year-olds from across Norfolk, to design and deliver a literary festival in a day on the theme of social activism. The group has taken a lead in all parts of the process, from inviting artists, to marketing and budgeting and finding a venue.

NCW said "It’s been an exciting year taking this group of inspiring young people on the programming journey and they are full of innovative ideas and creative energy, paving the way for more young people to take on the arts scene and keep the torch burning."

Read on to hear Billy's first-hand account of the festival process:

"The Handover Festival of Writing and Social Activism was organised by me and 14 Young Arts Professionals (all aged 15-17) and took place at the Anteros Arts Foundation on 11th May. We met for the first time in September at the National Centre for Writing (NCW), which creates and organises literary events taking place in our city. I applied for a role in creating the then-untitled festival last summer, seeing it as an opportunity to expand my knowledge of literature and gain a better grasp of event management (the prospective boost to my CV and a free trip to Poland enticed me as well). I’ll be meeting with the other festival organisers (all, like me, aged 15-17) in June for a debrief, but now that the process is largely over I’d like to take a look back at the overall experience.

The thing that most needs mentioning is the people I worked with. Vicki Maitland and Hannah Garrard at the NCW first advertised the programme to us, and their support throughout the creative process was instrumental. The rest of the Engage! group, as we were called, were consistently enthusiastic, imaginative and above all, a pleasure to work with. The NCW has planned several similar events for the future and I would highly recommend getting involved if you have any interest in literature or event management.

Secondly, the process itself. The aim of the festival was to provoke discussion about current affairs, particularly on young people’s identity and place in society. We threw around some big names to invite as speakers (including Charlie Brooker, who expressed great enthusiasm but sadly wasn’t available), and eventually confirmed the presence of five up-and-coming young artists and writers who spoke on topical issues such as immigration, mental health and politics. They included Holly Bourne, who has written several novels on teenage mental health, and John Dennehy, who lived as an illegal immigrant for several years. We had to work on every aspect of producing the festival, from budgeting, risk assessment (one of our less interesting sessions) and marketing the event, leading me to frantically hand out leaflets to my classmates. After months of hard work, we were generously rewarded with a trip to Krakow.

Although I spent only two nights in the city, I found Krakow to have an exciting atmosphere and a rich history. After some exploring, we met up with the Polish Engage! group for some poetry workshops in which I was impressed by both groups’ creativity – though sadly not my own! The hours of travel there and back were thankfully not too unpleasant due to the companionship of the other members of the group.

On 11th May, the festival itself took place. Although I was largely too busy to relax for most of the day, I felt that everyone handled their responsibilities professionally, and the size of our audiences indicated that the five events were highly successful. I particularly involved the “Write to Speak” author panel, which I and another Engage! member chaired. The three speakers were all interesting to listen to and I came away with all my questions answered. The day culminated in a spoken word performance by Jenny Lindsay which I very much enjoyed.

Overall, organising the Handover Festival, as well as the Festival itself, was both an enjoyable and educational experience. I suggest seeing if the NCW has planned any events which might interest you, either as an audience member or active participant. If you do get involved, you may find you have a lot to hand over to others."