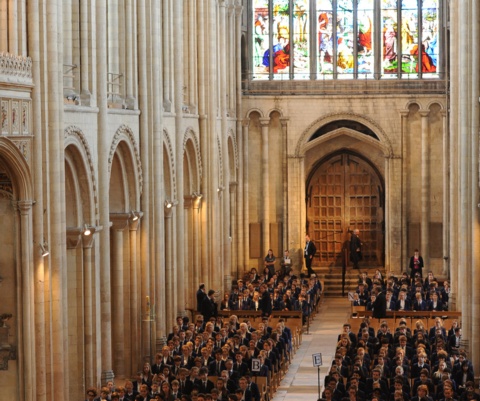 Thank you Aoife, and all the best for the weekend.

As some of you will be aware, Aoife is part of the senior netball squad who travel down to Brighton later today to take part in the national finals. Also tomorrow we have 6 runners in the English Schools x-c championships, which takes place at the Norfolk Showground. Both of these events represent the pinnacle of school sport in this country, and our netballers and runners deserve great credit for reaching this elite level. Former winners of the x-c include Mo Farah and Paula Radcliffe, and it is reasonable to assume that the future stars of your generation will be competing in both events.

Despite this, both events will be largely ignored by the media. You won't find either of them on TV or in the newspapers. Such is the place of school sport in England, where professional sport, mainly football, keeps schools, universities or any amateur sports out of the limelight. Things are rather different where I come from, particularly today.

Today is St. Patricks Day. People sometimes ask me how I, as an Irishman, celebrate St. Patricks Day. Well if I were back home, I would be looking forward to a half day, followed by an afternoon of celebration of school sport. The centrepiece takes place at Ravenhill, where a capacity crowd of nearly 20,000 will watch the 142nd Ulster Schools rugby final. A similar number will be in Armagh to watch the MaCrory cup gaelic football final. For those who can't get tickets, both matches will be broadcast live on BBC1 in Northern Ireland, followed by highlights of the hockey and soccer finals. School sport generally has a higher profile in Ireland, and St. Patricks Day is our equivalent of FA cup final day, for all sports.

As you may be aware, St. Patrick's Day isn't only celebrated in Ireland. Events will be happening all round the world today. There are street parties in Tokyo, Moscow and Buenos Aires. The Empire State building turns green for a day and the Chicago River is dyed green. And here at Norwich School, we are celebrating Green Day, when we are encouraged to think about the environment, and what we can maybe do to help.

This morning's reading tells us that God put humans in charge of the Earth, to rule over every living thing. Now whether or not you believe God put us in this position of authority, the bible passage certainly does describe the way things are in the 21st century. As a species we have filled the earth, and we do rule over all the other creatures. Since the Industrial Revolution, we have destroyed habitats, wiped out entire species, and developed weapons capable of wreaking unimaginable destruction. On the other hand, we have also developed a conscience that has motivated us to preserve species and habitats, and to try to reverse some of the damage we've done to the planet. The pressure of hunting and habitat destruction means that many of our most iconic animal species, like tigers, gorillas and blue whales would almost certainly be extinct by now if we as a species hadn't decided that we wanted to protect them. But while conservation and other 'green' issues have become mainstream causes in recent decades, we are still using up Earth's resources at an ever increasing rate.

As Benedict said a few weeks ago, the basic message of all major religions is the same - that we should try to show love and compassion to one another. One way that each of us can do this is by using up a little less of the earth's resources each day. There are many ways we can do this, some as simple of turning off the light when you leave a room. This morning I want to encourage you to think about one thing in particular - these. Bottles of water. Today you are all out of uniform, and hopefully you have brought in a pound for the privilege. That money is to be given to Water Aid, which is a charity that aims to bring clean water to parts of the world where it doesn't come out of taps. We are all incredibly fortunate to live in a country where safe drinking water comes out of every tap. The infrastructure required to get safe drinkable tap water to every house in the country is a wonder of engineering, and to keep it working requires annual investment of millions of pounds. And yet, many people would prefer to drink water that has been put in a little plastic bottle and driven across Europe in lorries.

Bottled water is an environmental nightmare from start to finish. Materials for the bottle, pollution and congestion caused by delivery lorries, litter, and ultimately plastic ending up in landfill sites, or even worse in the ocean.

Every day, at least a couple of these bottles end up in the bin in my classroom. These were yesterday's contribution. Please, if you want me to have a happy St. Patrick's Day, and show some love for your planet and the people who live on it, keep hold of your bottle and refill it with lovely fresh drinking water from a tap or water fountain.

Whether you believe it's God's will or not, the future of our planet is in our hands. And I would hope that as followers of any religion, or none, you would all want to look after it, for all our sakes.