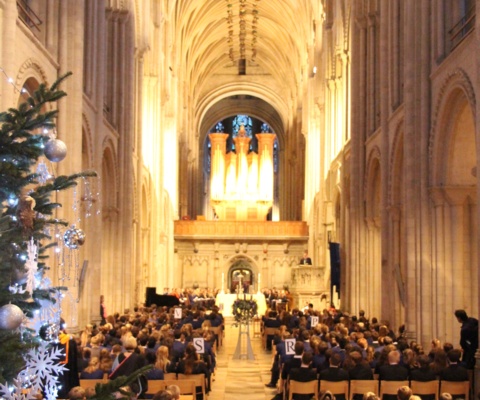 As we come to the end of another busy and productive term at Norwich School, it is inevitable that we reflect on how things have gone, picking out favourite moments as well as things we might have done differently. There will be academic, co-curricular and social elements to this process for each of you, such is the collaborative nature of our school community.

I have the good fortune to see lots of the school's highlights. They are almost too many to mention but this term for me they include: the whole school photograph, the Welcome Service for new pupils, Prizegiving, the House Music Festival, the GoGoDragon! Auction, the Young Norfolk Sports Academy launch, the Dyers' Service, busy Saturday sports afternoons at Redmayne, Courage in Action, the inaugural Junior Dance Festival, the Musical, Cyclops, Making Musicians concerts, the Special Schools Service and the Carol Service. Another highlight is even more recent: watching in the Refectory with some of you Tim Peake's rocket launch on the way to the International Space Station (ISS). As one saw those amazing engines in action, one could not fail to be impressed by the sheer scale of this human achievement. I was conscious that the pupils present did not share the emotional baggage of the adults who will have remembered all too clearly the high-profile US Challenger shuttle disaster from 1986. Despite the smoothness of this mission and the smiles as the astronauts entered the ISS last night, this was no routine or automatic operation, but one fraught with difficulty and the result of combined international intelligence gathered over decades.

Space exploration is at the edge of human experience and endeavour; successes such as Tim's launch, are more valuable in part because of the real risk of catastrophic failure. Our interest in the individuals involved takes in their willingness to shoulder this risk to be part of such a global programme. At 108.5 metres in length and a cost of $100 billion, the ISS certainly represents a beacon of international co-operation. I hope our annual foreign language reading of the start of St. John's gospel may serve as our own token of internationalism.

Those who were at Prizegiving in September will recall Tony Little, the former Headmaster of Eton, advising us to fail in order to develop resourcefulness and resilience. It is a theme taken up by Matthew Syed in his book, Black Box Thinking, which explores our attitudes to risk and failure. He cites successful people such as James Dyson who made 5,127 prototypes of his revolutionary double cyclone vacuum system, and David Beckham who started practising keep-me-ups aged 6 and did 2,003 for a full 15 minutes by the age of 9 before turning his attention to free-kicks. Syed writes of the difficulties faced by Drew Houston who had an idea for an online sharing and storage service when he forgot his flash drive on a long-distance trip. Houston was knocked back by countless financial investors because of the perceived saturation in the market, so he started testing his idea directly with the public in order to prove demand. In 2014 Houston's company was valued at just over $10 billion; it is called Dropbox.

Most would agree that success involves some mix of talent and practice. Implicit in the concept of practice is the acceptance that things will not necessarily go right straight away. However, it is often a challenge to our sense of our own talent to accept such limitations; being knocked back is not easy for the ego to take, and certainly not regularly. Both Little and Syed encourage us to rethink our approach to failure, to think of it not as a necessary evil to endure on the path to success, but to embrace it as a requirement for improvement. I think this view is valuable in a high-achieving culture such as Norwich School for two reasons. First, because it takes the edge off unhelpful tendencies towards perfectionism: it is ok to go wrong because it gives an opportunity for reflection and improvement. Secondly, an openness to failure encourages a spirit of invention, experiment and creativity. What's the worst that can happen? It can go wrong; oh, well that's ok, then!

As you reflect on your own term, be gentle on yourself if everything did not go according to plan; such imperfections are inevitable and ok because they allow you to learn from the experience. Well done to you all for what you have achieved this term. I wish you and your families a good rest this holiday.