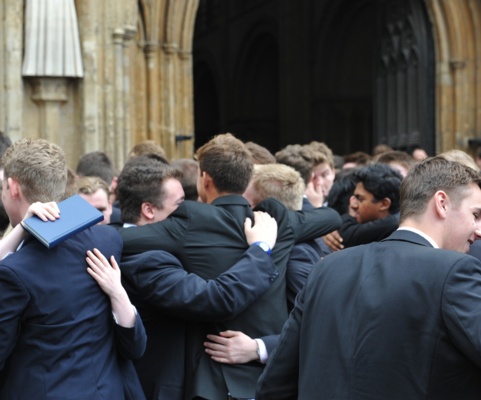 Well, it has been quite a term. So much seems to be in flux and uncertain in the wider world that it seems as if there is a disconnect from our charming daily dealings in Cathedral Close. Not long ago, the UK was recovering encouragingly from recession and there was a sense of economic and political confidence, stemming at least in part from a sense of stability. Fast forward a few short weeks and we have a resigned Prime Minister, an opposition with parliamentary and grassroots members looking menacingly at each other from opposing corners, a country on its way out of the EU, a kingdom possibly heading out of union. Only England's disappointing exit from a major football tournament offered reassuring familiarity.

I know I am not alone in saying that I have been feeling somewhat unsettled, and that is without the added hassle of examinations that some of you have faced. The reason, of course, is Brexit. It is not my job here to be political, but I do note that our own mock referendum made it clear that the pupils of Norwich School wanted to vote Remain in order to be part of the EU (over 75% of you were in favour). Much has been made nationally of this inter-generational divide.

My own observations of your motivation are less to do with economic stability and scaremongering about immigration, more to do with your wish to have options kept open to be available to you as you grow up and an instinctive tolerance of and comfort with the flowing and sharing of resources of all types, perhaps because of your more flexible view of borders shaped by the trans-national nature of the online, virtual worlds. This may all sound a bit wishy-washy, but Mr Murray had a nice phrase to encapsulate the absence of this positive vision of international co-operation from the Brexit debate: "nobody sang a song for Europe". It is certainly a personal regret that the benefits of such an approach were not promoted more in the campaign and seems at least in part to explain the sense of loss which has fallen since the vote. It may not be rational (or, for Brexiteers, justified) but there is a general sense that we somehow feel less connected, less kind, less optimistic.

This all sounds pretty miserable and perhaps not right for this occasion, so I want to tell you about something which did much to brighten my mood and restore a sense of optimism. This may be a surprise, dear listeners, but it was watching Adele at Glastonbury. Before there is any staff indignation in the aisles about the Head Master swanning off for a jolly while they prepare for YNAF or pupils horrified by a vision of a middle-aged, mud-spattered wannabe hippy, I hasten to add that this was watching her on television. During the show she came to a thrust stage and asked the audience (some 100,000 people) to turn on and lift up their mobile phone torches. I'll spare you a bad version of the accent but she said that "we need to look after each other". Please keep that idea of a huge festival crowd joined together by a simple, shared action as Saskia Walsh, accompanied by Seb Johnson, sings what Adele sang for that crowd, the Bob Dylan song, "Make you feel my love".

Thank you, Saskia and Seb.

Why did that song help me? It reminded me that for all the political and economic uncertainty thrown up by recent events, our common humanity has not changed. The words speak of a simple, unconditional bond being generously offered and the occasion showed thousands of people embodying just such a bond. You may not care for the song or the singer, but it was difficult to deny its emotional resonance at this time.

And my returning good cheer has been reinforced by you. In my opinion, schools are inherently optimistic places because pupils are so full of hope and healthy ambition. The good news stories have certainly been thick on the ground in the last few weeks. One simply has to smile when seeing the cast of Jesus Christ Superstar belting out their well-known songs to a full house at Gala Night or pupils of all ages rubbing shoulders to put on a magnificent Cloister Play, the Forum exhibition offering an explosion of creativity in multiple media, the supportive yet highly competitive atmosphere of Sports Day on Saturday, or the chapel choir singing Seb Johnson's simply astonishing piece, Evening Hymn, in the late night vigil in Cathedral on Monday (more of which later). We must all remind ourselves of the simple joys we get to share together on a daily basis at Norwich School: the winning goal, the standing ovation, the encore, the A grade homework, the time chatting on Upper Close Green, for our leavers the joy of the last week in waking up and knowing that you have absolutely nothing to do.

And all this leads me to our leavers, who soon will process symbolically out of the west doors to finish their time as pupils of this school in order to take up their places in the wider world. As is now traditional, you have been given your own hymn book, a token to remind you of the school and, in particular, this wonderful building: the time you have spent here, the hymns you have sung and, I hope, the values you have picked up. I think the world into which you move is uncertain and will, at times, be turbulent. However, there is still much which is good in it. The simple joys you have experienced here or versions of them will still be there for you, as well as new activities you have not yet discovered. You need not by tethered by decisions others have taken; your talent and adaptability will enable you to find your way, even shape the world to your will.

In all this optimistic exploration, I hope that Norwich School will be an ongoing touch-point, a rock of consistent values on which you can draw. We have a way of doing things here, of treating each other with care and respect, of doing our best for each task, of seeking out new opportunities, of offering to help others. Please take this Norvicensian way with you on your ongoing journeys; we are all proud of you and send you forward with our very best wishes.