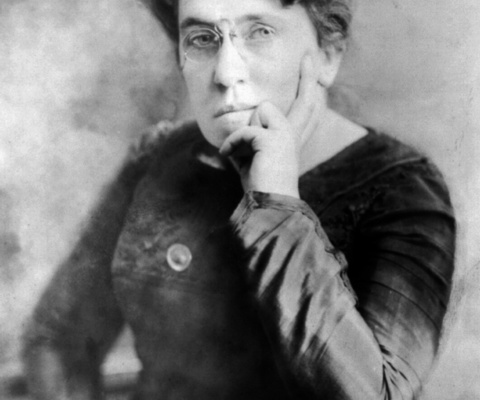 For our Women's History Month series, Sophie Cook (L6) writes about the radical life of Emma Goldman, the anarchist political activist and writer.

At one point in time, Emma Goldman was ‘the most dangerous woman in America’, but following her death in the mid-twentieth century, she faded from fame. Despite this, her work remains at the core of modern anarchism and feminism. It saw a resurgence in the feminist movement of the 1970s, her theories so ahead of their time they seamlessly slipped into place. Even today, her arguments are extremely relevant, and her determination is equally inspiring to those fighting for equality.

Goldman was born in 1869, in Kovno, Lithuania, part of the Russian empire, and was seemingly destined for a simple life as a housewife, with no access to higher education, but she continued to defy this for the seventy years she lived. Her childhood was defined by hardship, both from widespread anti-Semitism of 19th century Russia and internally within her family, her father a cruel and violent man who exacted much of his rage on Emma, the most rebellious of the children. Despite Goldman’s limited education, she took full advantage of what she could find. When she was twelve, the family moved to St Petersburg, where she began to encounter radical students. This enthusiasm was continued in her reading of the time, already she was consuming works from famous Populists and Nihilists. At the age of fifteen, her father attempted to force Goldman into an arranged marriage, so to avoid this, she moved to the United States with her older half-sister. Here, she found her way into politics, after a protest in 1886, in Chicago's Haymarket Square. It was objecting to police brutality in response to a workers’ strike, which quickly ended in chaos after a bomb went off when the police became involved again. The police and press soon began blaming prominent Chicago anarchists for these events, eight convicted and seven sentenced to death for a crime despite the incredibly flimsy evidence. Goldman was horrified by this injustice, and threw herself into the Anarchist movement in retaliation.

Goldman’s involvement in the Anarchist community of New York only increased from this moment onwards- in 1892 she and a fellow Anarchist named Alexander Berkman plotted to assassinate Henry Clay Frick (owner of Carnegie Steel Company, who had provoked a brutal confrontation with his workers earlier in the year), but failed to kill him. Goldman escaped any charges due to a lack of evidence. By the next year, she faced ten months in prison for urging the working class to embrace demonstrations to achieve change. Her life continued in this chaotic fashion. In 1901, the police tried to implicate Goldman in the assassination of President William McKinley, because his confirmed killer had attended one of her many speaking tours. This was a display of how the government tried to use back. Yet again, Emma Goldman was released from custody, and what followed was one of her most active periods. Her greatest success was in spreading awareness, founding the influential anarchist journal Mother Earth, as well as touring the US to spread her message in multiple languages. She was a great believer in free speech, especially outraged at America’s attempts to suppress left wing speakers, in such a civilized atmosphere as an assembly. As the government became more determined to silence Goldman, she became equally determined to rebel against this, and began regular lectures on free speech, inspiring a whole generation, notably Roger Baldwin, a founder of the American Civil Liberties Union. On top of campaigning for local political issues, she was a revolutionary speaker on education, anti-militarism and feminism, even advocating for birth control and economic freedom for women. These ideas were also conveyed in dozens of essays published from 1910 onwards. Her past experience as a midwife -among poor immigrant workers in New York in the 1890s- radicalized her opinions on contraception, which she saw as essential to allowing the sexual and economic freedom of women. However, unlike many, she acted upon her words too, and took direct action, smuggling contraceptive devices into the US. These opinions on the reproductive repression of women was another factor towards her many arrests over this period. Her unpopularity even seeped into Anarchist circles, with some disliking her advocacy of homosexual rights.

After World War One, Goldman was deported from America, in a time of heightened xenophobia where officials could manipulate the fear of the courts to ensure her removal from the US, under the 1918 Alien Act, but this did not stop her political activism in Russia, and later in Britain. Emma Goldman’s presence remains within modern society. The foundations for equal rights for women were made over one hundred years ago by a woman who was passionate in her ideals, even when her opposition was violent. Thousands of mourners visited her grave to commemorate her works, and even when she slipped from public view, her relevance resurfaced when feminists of the 1970s rediscovered her works. In our current climate, Goldman again becomes relevant, her words as significant to modern struggles as those in the 1890s.  Inspiration can be taken now, both in her attitude and in her message, and for this, she should be far more honoured in history, as well known as those of the suffrage movement.