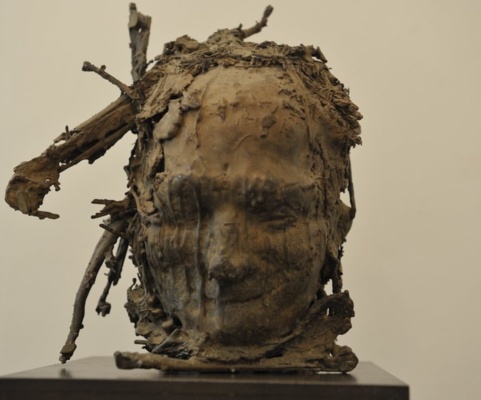 Writers in the school's creative writing group, Writers' Bloc, were challenged to write pieces inspired by the Laurence Edwards exhibition in the Crypt. The pieces were displayed alongside the sculptures and paintings, and some of the pieces were read out as part of the Artist's Talk and Private View. The exhibition 'Visitor' is open until 25th November, Monday - Friday 12am - 4pm and Saturday 11am - 2pm:

Hugo Dimoglou - Inspired By The Work of Laurence Edwards

There was once a dark forest. You had to be an alien to find your way out. It is alive, moving and changing. Because of the little sunlight there, the dark plants learnt to live off meat and flesh. The sticks curl around your head, and tug it off.

The trees towered up to the sky, and I have to say, they are beautiful, and they lure you in. The beautiful grass is green, and the gently breeze slowly pushes you forward, making an effortless feeling of adventure.

He may look bulky now

But he's so delicate.

He looks in the mirror,

He walks down the street,

But the people who love him

With all the fun drained out.

The only words that penetrate Eleanor Perkins - Inspired By The Work of Laurence Edwards

Mud and leaves plastered to his head as his body, encaptured by stones, rose from the marsh. A squelch echoed through the reeds disturbing the birds from their forming nests. It was springtime and many animals were creating new homes ready for new life, however the favourites of his were the birds nests. The birds worked hard for many weeks to build their masterpieces as a sculptor spends much time on their work. They were like tiny men trafficking twigs, struggling through the week. Birds nests were special , they were the only thing that a man cannot make no matter how hard he tries. His stone body was his home, he took it wherever he went - a gypsy of the bog. Once he had fully emerged from the sodden sediment he stretched slightly and gently brushed the sticks and leaves from his shoulders.

Chester Dimoglou - Inspired By The Work of Laurence Edwards

Henry sat on a log, gazing upon the boy he had thrust into the hungry, raging flame of the campfire. The blaze seemed to roar like a frightened lion, like the boy did when the scorching flames licked across his face. Now look at him. His skin and flesh melted and poured down his bare skull like a wax candle.

The roaring sirens made him fight his legs harder to run away and he didn't stop running until they were barely audible. He didn't know much about this strange place but one thing that was certain was that the bad place with the even worse people were not good.

As he willed himself to trail on into some dark scary woods, many blood thirst snigger dogs with even more blood thirsty armed guard's persued on after him.

He came up to a river which made him feel safe and started to cross it the freezing water coming over his bare toes. The trees overlooking him slowly whaling, urgently trying to warn him of the danger near. "Snap!" He darted around to see the perpetration of the snapped branch was a vicious growling dog and with it were a dozen other canines with men carrying heavy rifles all pointed directly at him.

This time there was nowhere to run, nowhere to hide and there were way too many guards to take down. So he did it. Did the thing which ended him up in the bad place. There was no doubt these people were here from the hell hole to find him and bring him back. But no, not this time, no more crazy painful, inhumane tests on him, they could find another lab rat. However, that would prove difficult as there was no one else on this planet able to do what he was about to do.

Flint rocks, all jumbled along the river flew into the air and shot towards him and they stuck onto him.  As more and more did so, a heavy shell of armour was coated onto his body.

All the guards and the dogs faces turned to a bewildered look as what was the perfectly clear visual of the target was now vanished into the darkness.

"Crap!" The lead guard angrily said "He can't of gone far" he commanded. As all the guards and their pets rushed across the river, frozen in this feet was their target. He stood there, in his natural incognito, a worried look on his face, begging the bad people from the laboratory had gone, gone for a while at least. You reveal yourself to me

You tug at the lies you created yourself with

Soon they begin to give.

You are naked, on display

No longer protected by your perfect façade.

But you are an imperfect masterpiece.

You are sad, Alone

And you hide it between the lines

But it is beautiful

You put your lies back on

Wrapping them around your shame and insecurities

But it's too late

All I see now

Is you, and only you

And I love you more.

As soon as I walked in my eyes scanned the room of intriguing sculptures and beautiful paintings, but my eyes were immediately drawn to a hauntingly strange "bubble wrap man" the perfection of the creases in the bubbles and trapped and burdened expression on the man's face astounded me. How his body language, posture shows how he is feeling. Trapped and depressed! It's easy to see the marks of tape and string that have been wound around the bubble wrap, encasing him. The whole structure seems to stand out against the trend of nature, but somehow fit in almost perfectly. A quote that the artist used more than once in the explanation "sucking in the nature" I assumed he was in some way sucking in bubble wrap and plastic from all the pollution. It wasn't until I asked the artist what he was trying to portray in the piece that I fully understood. He was trapped in a sense. It is inspired partly by drunks walking late at night, wobbly, confused and not in control of his own body until the day later. The other half, the bubble wrap was fully inspired about how he kept the other sculptures moist at night by wrapping them in cling film and bubble wrap. He talked about how he wanted to take a risk and incorporate the bubble wrap into his piece. By adding the tape and string (and wire) (which I commented on earlier) he made this sculpture even stronger. I thought somehow it was completed by hand but it actually used man made materials. There are small details that were not intentional that only add to the final piece, and these are small drops of wax that come from making the cast for the sculpture dribbled down onto the body and even dripped onto the area below creating perfect drip marks. From these to the strange and slightly scary face to the lines and marks on the bubble wrap this truly is an amazing sculpture! Daisy Campbell - Inspired By The Work of Laurence Edwards

Hidden from rain but seeking the stars.

They borrow the earth and the pebbles and stones,

The twigs underfoot, and the leaves that turn brown,

And receipts that we drop, the labels and tags,

Frayed parts of garments and fragments of rags.

Holding their bricks, but better designed.

Their home, no craftsman can ever quite grasp,

Bliss is encroached by a desperate attempt,

Never just so, not as light or as raw,

As the little twig house, lined with moss, bound with straw.