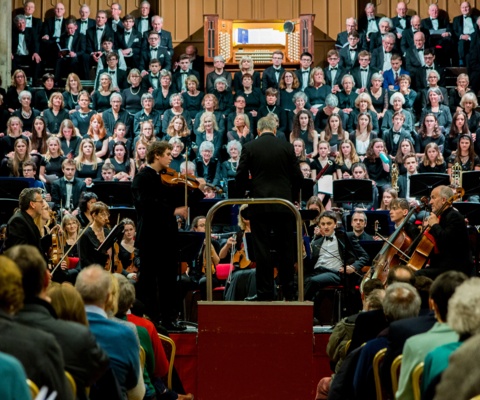 On Saturday 3rd March, Norwich School Choral society performed in partnership with London Mozart Players (the UK's first chamber orchestra) in a memorable concert at St. Andrew's Hall. This is the third year of the successful partnership. Several Norwich School pupils were given the unique opportunity to take part, and for the first time, advanced instrumentalists and singers from other local schools were also invited to play and sing in the event. Norwich School's Director of Music, Richard Allain, conducted the orchestra.

"At two o'clock on Sunday the 3rd of March the Chapel Choir, Choral Society, Gateway Players and London Mozart players gathered in St Andrew’s Hall, cloudy weather outside and intricate seating arrangements inside. Rehearsals started at 2:30 on the dot - a feature reminding everyone that they were working with professionals today. This was the real deal!

At 7:30 the concert began with a selection of folk songs from John Rutter’s The Sprig of Thyme. The first – ‘The Bold Grenadier’ – could be considered to be a song about love, seduction, or duty to one’s family. Whilst it is sometimes hard to tell from the lyrics, the ambiguity doesn’t detract from the music - much to the contrary. Rutter’s musical style, which some might consider ‘chocolate box’, is subverted here and one is met with a deeply intimate dialogue between the composer and the folk music of his country.

Soon following was a masterful rendition of Bruch’s heart-wrenching ‘Kol Nidrei’ by U6 student Adam Possener, who was able to deeply express both the repentant theme of the Kol Nidre prayer of the Jewish holy day Yom Kippur and an ecstatic joy and reflection in this highly Romantic composer’s lyrical masterpiece.

If you weren’t already emotionally drained, then Brahms’ Geistliches Lied left you speechless. The work is in a ‘canonical’ form, effectively a more intricate form of what one might hear when singing Frere Jacques. However, unlike Frere Jacques, the piece takes you on a journey to the heavens, suggested by its apt title ‘Spiritual Song’, even more, apt when you take the literal translation of ‘Ghostly Song’. The ‘Amen’, treated minimally in the Mozart later in the evening, is expanded here into a swelling expression of both longing and wonder, surely more than what you might expect from reading the programme.

Like setting up a wind-up toy the interval prepared the audience for the impactful Requiem by Mozart, written in the last few years of his life - something clearly felt in the foreboding quality of the Dies Irae or ‘Day of Wrath’. Yet somehow Mozart also conveys a sense of distant nobility and nostalgia in the piece, with the opening of the Tuba Mirum played by L6 pupil, James Thistlewood, and sung by Old Norvicensian, George Rolls (02-13). While the work can be seen as an expression by Mozart of his illness, I feel it proposes something far more universal than simple self-pity, far more than I felt I bargained for and I hope for more than the audience bargained for, as was the case with the rest of the programme."

If you would like to purchase pictures from the Norwich School Choral Society Concert, please email marketing@norwich-school.org.uk