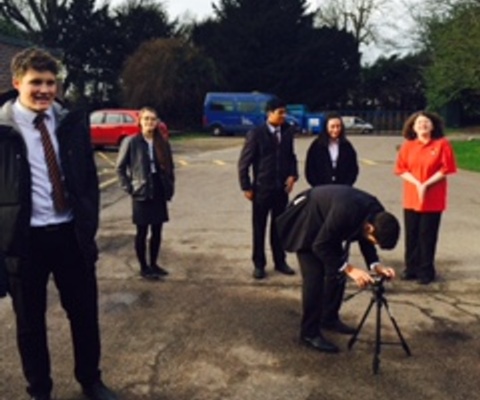 As part of the school's community service programme, a group of our Upper 6 pupils have been involved with a special needs project at Hall School in Norfolk, which defines itself as a 'Specialist College for Communication and Interaction'.

Our pupils have had the opportunity to build rapports with the students at the school and have cherished being able to gain an understanding of how their education differs from our own - joining with activities such as singing songs, playing games on the interactive whiteboard or joining the children in playing with the dreidel, and learning about its relation to the Jewish tradition of Hanukkah.

The BBC were interested in the work that we have been doing together and are assisting in the making of a film to illustrate the variety of ways that students at the Hall School communicate. These communication methods range from a specific type of sign language called 'Sign Along', to communication boards and iPads. Technology is an essential part of the lives of the children at Hall School, particularly for those with more severe communication difficulties, and the students showed concern that they did not have sufficient funds to be able to develop their communication techniques, which allowed them to truly appreciate how privileged we are as a school.

Cameron McLaren (U6B), who has been working with the Hall School for three years expressed that it has been fulfilling to see the children he works with gradually become comfortable with the volunteers, whilst Lucy Hopgood expressed that she was humbled by how excited the children become when they see them, even though it is only a small aspect of the volunteers' week. Furthermore, the volunteers voiced their amazement and respect towards the teachers at Hall School, whose considerate, helpful attitude never ceases to impress them, and often care for the children at the weekend in order for their parents to have time to themselves.

Through working with the BBC, the group are hoping to raise awareness for a section of our society who try incredibly hard to learn how to communicate with others in society, and deserve to have their stories heard. Our pupils have had camera training from the BBC and will be working together over the next few weeks.