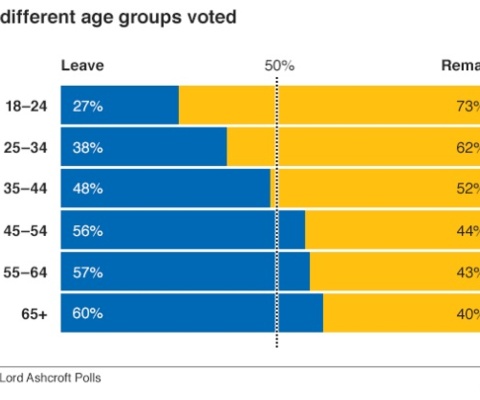 A young person's look into the future of Brexit

The morning of the Friday 24th brought with it the news of the outcome of the referendum: the Leave campaign had one with 52% of the vote and the UK would cease to be a member of the EU. One has only to look at the numbers to get a sense of the feeling of the majority of young people in the UK about this outcome. A resounding 73% of 18-24 year olds voted remain compared to the 60% of over 65s who voted to leave the EU. This is backed up by the mock referendum conducted by the Politics Department, with 257 Norwich School students voting to remain and only 86 voting to leave. Feelings of shock, disappointment and even anger are held by many young people. In most cases this is simply due to the recognition of the fact that those not old enough to vote were unable to express their opinion and yet are the age group who will have to live through the consequences of the result for the longest. Many psephologists are convinced that, if the voting age was lowered to 16 or even 17 years of age, the Remain campaign would have comfortably won. Experts have pointed towards a broader pattern of identification, the lack of experience of being outside the EU and the tendency to hold more progressive values as reasons why young people are more pro-European. Many young people now worry about the uncertainty of their country's position in the world and also the future implications it will have on the UK's economy. Will we ever have the same level of influence on the European and global stage again? Will our generation be crippled by higher levels of national debt and smaller GDP? Moreover, there are concerns over the impact on the number of jobs available, the level of service the NHS will be able to provide and the ability to travel, study and work abroad to name just a few. Personally, what I find most concerning is not the alarming economic statistics, but the impact that this referendum will have on society as a whole. The outcome has been hugely divisive, already resulting in protests and mass calls for a second referendum. I am deeply concerned what values this referendum may teach future generations: the way the Leave campaign cast fragmentation in a positive light, an alarmingly extreme view on immigration held by some and the growing trend of the development of an era of post-factual politics all should not be encouraged. The young people of this country will have to come to the realisation that we are living through momentous times.  The major constitutional changes which we face, including the increasingly inevitable independence of Scotland and the break-up of the United Kingdom, will mean nothing will ever be quite the same again.

However, it is important to understand that Brexit is not just an event, but a process. The issues and consequences caused by leaving the EU, which will have to be dealt with by our government, are not going to go away any time soon. Our generation will have the opportunity to reshape our country from the swirling turmoil it has been left in and to make our mark on the future of the UK. In the cold light of the dawning of this new era, it is crucial that we no longer dwell on that which has happened, but we are able to learn from previous mistakes and try to move forward as a united country.