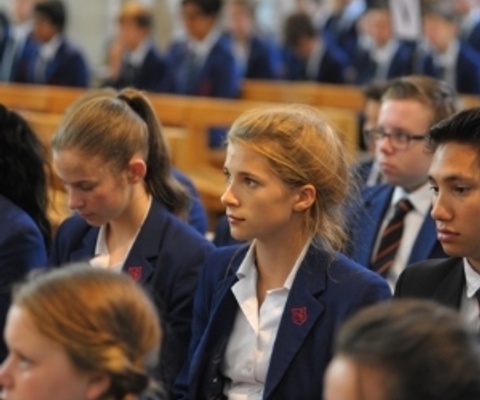 A View from the Pulpit: Cathedral address about New Year's resolutions by Head Master Steffan Griffiths Exit signs... they're on the way out.

[I'm going to keep going until I get a groan]

So I made a call and said "Who's speaking please?" and the voice said, "You are".

These are not Christmas cracker jokes but I concede that they are not far off: the above are a selection from the Tim Vine joke book, the man who has twice won an award in recent years for the 'best joke' of the Edinburgh Festival. It was one of my Christmas presents and you have just heard a sample of my children's favourites. I have certainly enjoyed observing how small wordplays or situational changes can render a word or phrase comically absurd and I hope your holidays have contained things which have made you laugh, particularly in the company of those closest to you.

You may remember in the last address of the Michaelmas Term, I mentioned revising goals in the light of last term's achievements and I trust that, as well as having a rest and offering kindnesses in the holidays to show your gratitude for the support given to you during term, you also took time to think through what you want to achieve in 2015.

Much of this goal-setting will be familiar for many of you and I do not intend to spend time encouraging you to work hard, get involved and be kind to each other. We expect Norvicensians to follow such behaviour. Instead, I want to share something with you which surprised me, and might challenge us all as we set about this new term and new year.

Brian O'Driscoll, the legendary Irish and British Lions rugby player, who is currently the world's most capped player, exposed widely held myths about elite sport in a recent interview. One particularly caught my eye. He said,

"Practise things you're good at. Keep on top of things you're not so good at, but be world-class at your best. Never think, I'm very good at this and that, I can leave those for a bit."

And for those who are old enough to remember, he went on to say,

"What do you remember about Jason Robinson? His feet. Not how improved he was under a high ball or his kicking skills. Everyone remembers those feet. He could run round you in a phone box."

I can see that this call to accentuate strengths is very good advice for people in the sphere of elite activity, whatever that might be. It is not odd to think that the balance between time spent on strengths or weaknesses at your age is different from that for an international sportsman and I would argue that schools are in a different arena of development, where preparation of young people for life requires the establishment of a general level of competence and a wide-ranging curiosity. Indeed, I am explicit to GCSE candidates about focusing on their weaker subjects to produce a flat line of performance in order to enhance university application prospects.

I have also said before now that I think the 21st century will require people of your generation to be flexible, lateral thinkers with skills which are transferable in a fast-moving and creative workplace. This build-up of different skills and approaches does not necessarily sit comfortably with O'Driscoll's focus on key strengths.

Yet you cannot argue with 141 international caps and 47 tries. You are already in a competitive world and having great strengths is more likely to get you the job, the role, the part, the grade than merely avoiding the exposure of weaknesses. If Norwich School can help to make you world class, to give you "your thing", that will be something of which we will be proud. And for each of you, the balance between "your thing" and the other facets of your life needs to be managed as you develop and your priorities change, a process during which you may well need support from pastoral staff at school and your family at home. You may find that you gradually specialise more and more until you are focusing exclusively on your chosen activity, armed with all the experiences you have had in your time here in the Close and elsewhere. I hope that it will indeed mean for at least some of you that you will be world-class.

This morning's reading (Matthew 7:7-11) invites us to "ask...seek...knock". I trust that whatever your strengths and your goals for this term and this year, you will be ambitious for yourself and be proactive in seeking them out.

Oh, and the Tim Vine jokes that won the Edinburgh awards? In 2014 he won with "I've decided to sell my hoover; well, it was just collecting dust" and in 2010 he won with "I've just come back from a once in a lifetime holiday. I'll tell you what; never again".

I hope you all have a very good term.