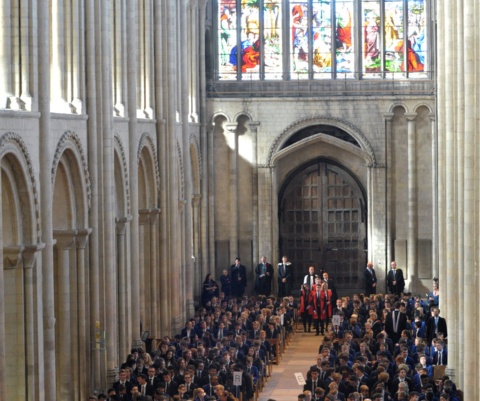 School Chaplain Reverend Child is contributing to the 'Opinion' section of the EDP throughout the year, along with other members of the local clergy, with a 'Thought for the Day'. His pieces will come from the perspective of a chaplain, as his first contribution below demonstrates well, describing a Norwich School scene from our first day back after the summer holidays:

The man was smartly dressed, greeting everyone with a smile and a nod as they went past. Everything in his manner was assured, aware, informed.

The boy was lost, in every way. He was drowning in a new school uniform that was several sizes too big. Mouth open, face blank, he turned like a faulty compass, too confused to take a step forward in any direction. He was the complete opposite of the man he was standing next to. The boy might have stayed there all day if the man hadn't noticed him and come to his assistance, asking a few simple questions, gathering some clues about who he was and where he was supposed to be. The man called over a much older boy, a prefect, and gave him a charge - 'Make sure he gets to the right place.'

This was a brief scene on the first day of term at the school where I work as a chaplain. The man was the head teacher, and the boy was one of many new pupils. It was quickly over, but this encounter between the most powerful and the least powerful person in the school stayed with me, perhaps because it was a cameo of the school's Christian values. At its heart, Christianity is all about the powerful stooping to help the powerless. The Samaritan in the famous parable is 'good' because he stops to help the one in distress. Jesus spent his time with people at the bottom of the pile, to the puzzlement of those with social standing. The grand story of salvation is about a high and holy God descending to the lowly regions of the world.

I suspect the new pupil will remember the help he received that morning for some time. The head teacher, in contrast, may hardly have noticed the moment, one of many in the whirl of September's start up activity. But lending a helping hand is no less valuable when it happens automatically. What, after all, would the world look like if we all helped people at the bottom of the pile without giving it a second thought?