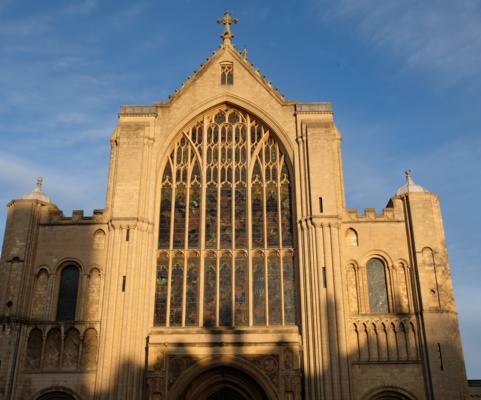 Our school Chaplain, Rev. Child has been involved in several ‘isolation-friendly’ activities over Easter – as well as writing the piece below, which was featured in the EDP, he has also recorded a series of Easter reflections for the Aylsham & District Group of churches. The idea came after a series of visits  to different churches on the different days of Holy Week were cancelled after all the churches closed, so he recorded the talks instead as a way to connect.

A reflective Easter isn’t all bad

For churches, this will go down as one of the strangest Easters ever, and the records will show it. Parish churches keep registers of how many people have attended each service; Easter Day is the most significant in the Church’s calendar and generally has a high attendance. Not this year, though. Anyone looking through the records in a century’s time will need to know their history to understand why no-one was in church on Sunday 12th April 2020.

It is a trying time for clergy and congregations alike. Gathering, lifting hearts and voices, celebrating the end of Lenten sobriety and the dawn of resurrection hope: these are long-held habits and instincts. But this year, we must (for good reason) remain socially distanced, and it may feel rather like we are stuck in a cross between Good Friday and Groundhog Day.

Are there any silver linings here? Perhaps so, for several reasons.

First of all, the Church is not the same as the Premier League, which needs matches to be played and stadiums to be filled, or it ceases to exist. Easter is first and foremost something that happens in the human heart, and that is where the season will need to be celebrated this year more than any other. Christianity is ultimately about people, not buildings, being filled with faith, and this is the year to check that we have not forgotten that priority.

Secondly, the original events of Easter are surprisingly suited to quiet reflection. Think of the women who visited the tomb early in the morning and stood in its cool, strangely empty interior, or the two disciples who met the risen Jesus without knowing it as they walked a lonely road. These original Easter experiences were times of letting the truth sink in, of realising the consequences of resurrection. This year’s necessary seclusion is a chance for modern disciples to do the same.

Thirdly, just because there’s a gap in the church register, it doesn’t mean nothing is going on. Sometimes thought of as a bit traditional, the church has gone online in a way that no-one quite anticipated, meaning that it will be possible to look in on virtual services (albeit from vicarage living rooms) like never before – a potential gift for those who are, as it were, interested but not ready to be counted.

In these exceptional circumstances, Easter is still out there. The church register was never that good at showing what is really going on.