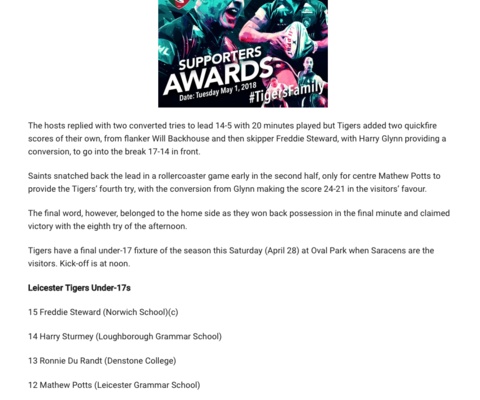 U17's miss out to last-minute score

Leicester Tigers were edged out in a 26-24 defeat by Northampton Saints in an under-17s fixture at Franklin’s Gardens on Saturday.

The visitors led 24-21 until the last play of the game when Saints claimed their winning score.

Played on the main stadium pitch on the hottest day of the year so far, it was Tigers who made the breakthrough with a score from wing Luke Phoenix after 11 minutes.

The hosts replied with two converted tries to lead 14-5 with 20 minutes played but Tigers added two quickfire scores of their own, from flanker Will Backhouse and then skipper Freddie Steward (Norwich School pupil), with Harry Glynn providing a conversion, to go into the break 17-14 in front.

Saints snatched back the lead in a rollercoaster game early in the second half, only for centre Mathew Potts to provide the Tigers’ fourth try, with the conversion from Glynn making the score 24-21 in the visitors’ favour.

The final word, however, belonged to the home side as they won back possession in the final minute and claimed victory with the eighth try of the afternoon.

Tigers have a final under-17 fixture of the season this Saturday (April 28) at Oval Park when Saracens are the visitors. Kick-off is at noon.